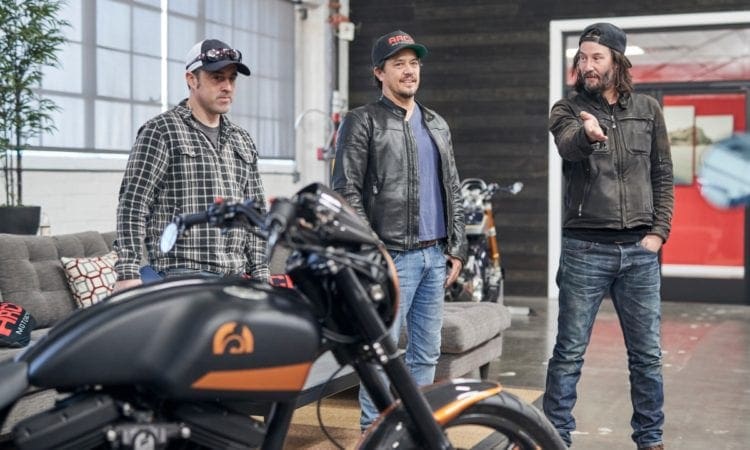 How did the bike come about?

Gard: It came about from a wish, discussion with Keanu who wanted an American cruiser, but wanted something different and unique

Keanu: Yeah, I wanted one which handled!

Gard: We built the prototype, based on a Harley, and when we got close to the finished product Keanu was “hey we should build more of these”. I said no at first, but ultimately when the bike was fully finished, when we both rode it, it was a very different riding experience than we’d had before, so then we considered the idea and we started ARCH.

Keanu: The KRGT-1 was the first bike. Since then we’ve been looking at updates based on customer feedback, our feedback internally and over the past year the bikes have been evolving. Then two things happened, we had design ambitions, like re-designing the swing-arm and we embarked on making the bike Euro-4, which brought many challenges. We had to make the bike legal in Europe. An example is the rear tyre envelope, we had to make that larger, we couldn’t have the hugger close to the tyre. But we also saw that as an opportunity to re-design the rear fender. We had a technical goal to meet, for Euro-4 but we also saw that as a design opportunity, a chance to be creative, and you’ll see many examples of this across the bike. We refined and updated the bike while at the same time meeting Euro 4.

What were those upgrades?

Keanu: We crated lots of cool elements on the new bike, like ABS, but with that we needed new reservoirs and brakes. We needed a new, more informative dash, but for that we need a new cowl, wiring for the turn signals. We changed the front end, changed the chassis position, the new swingarm, it’s an evolution of the old bike, it now turns a little quicker.

When you’re re-designing a bike are you looking at handling, performance, or aesthetics?

Gard: I think we must look at them all together, and me and Keanu work well together. The initial drive was for a re-style, and we wanted to remove some weight and unsprung mass. Then we wanted Euro-4. Like Keanu was saying we took Euro-4 opportunity into design. We’re small enough to make our own changes, we don’t have marketing, logistics, legal etc departments, it’s just us creating a motorcycle.

Keanu: The flexibility comes from the fact we produce our own parts, over 200 items, so we can try different designs.

How far is this bike from the original bike Keanu brought into your shop to be modified back in 2007?

Keanu: Basically I had a Harley Dyna, I was a little er, you know. It was an amazing motorcycle, but I wanted a big V-Twin, a big rear tyre, like a cruiser, but I wanted it to handle, I didn’t want to have to inpurch it on to its side with loads of effort to get it to turn. I didn’t want to push the front into a corner I wanted a bike which handled. I also wanted to go long distances, but when I got in the canyons, when I got in the curves, I wanted it to work. This is what I wanted, and we’re close to that original idea now.

When you’re re-designing parts, the swing-arm for example, do you have a ‘mule’ bike and how does the testing work?

Gard: We always have a few bikes which we ride and test parts on, the new bike you’re riding has 3000 miles on or more. We’ve tested parts on that bike.

Gard: Keanu can make shit happen that nobody else makes happen, he’s so good at breaking things.

Keanu: If something is going to break, in the early stages something electrical, it will be with me. I don’t try to break them it’s just a natural talent I have. Part of the experience and enjoyment for me, the opportunity is to ask questions, why are we doing it that way, then test ride it. For example, in our tyre selection process we had to go through a wide selection of tyres to work out which worked the best. We had one company which wanted to be involved but it didn’t ride as good as these. Gard would put a set on the bike and say, tell me which you prefer.

So, decisions are based on what works best and not commercial gains?

Gard: We want the best for the bike, we don’t test every exhaust for example, but we know from previous experience Yoshimura would produce the best exhaust for this bike. Many vendors which are usually driven by volume have taken an interest in the bike, and have supported us, created a bespoke part for us, even if the end volume is low, Ohlins for example. The forks are unique just for ARCH, even the switch housing.