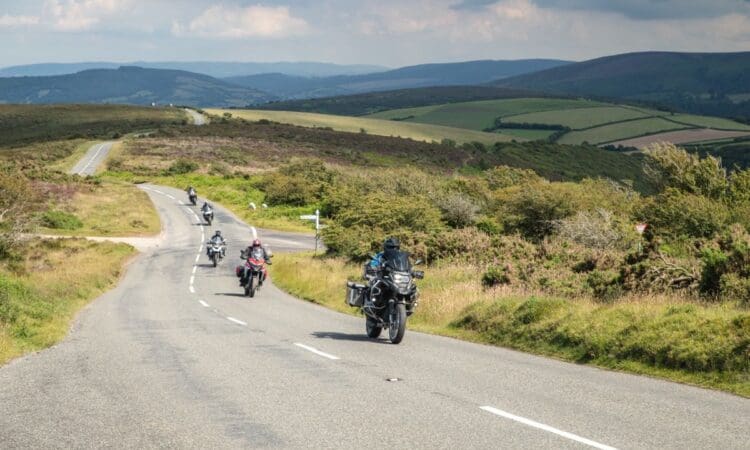 There’s some spectacular riding down in the south west corner of the UK. With two distinct coastlines and two National Parks, Dartmoor and Exmoor, Devon’s the place to go if you’re looking for dramatic scenery and top riding all in one spot. From dramatic seascapes and wide-open moorland to nadgery little lanes and picturesque towns and villages, this little corner of England really is a paradise for bikers.

Start the route at Buckfastleigh and briefly head north on the A38 before turning left towards Hele and Buckland in the Moor. At the junction with the B3387 turn left and a short distance further right towards Bonehill. You are now heading towards Southcott. It is worth watching out for a sign to the medieval village of Hound Tor. Turn left in Southcoot and head towards Lettaford. Turn right on to the 3242 to Sloncombe, and left on to the A382. This will take you to Whiddon Down, passing three castles off to the right – Cranbrook, Prestobury and Castle Drogo. At the junction with the A30, turn left to Okehampton, and then south through Meldon, picking up the A386 towards Sourton. You are now skirting the western edge of the national park as the road passes through Beardon and Mary Tavy to Tavistock. Watch for a left turn on to the B3357 on the northern edge of the town and signs to the right for Sampford Spinney and south to Walkhampton. Turn left on the B3212 which will take you to Princetown. Carry on this road to the B3357 towards Two Bridges and east to Poundsgate. You can then cut south to Buckfast and back to the starting point.

This is a great opportunity to head along one of the best, uninterrupted coastal roads in the country. You will ride across cliff-top moorland at the top of the national park, tackle steep descents and have the opportunity to linger in some quaint Devonshire villages.

Starting in Ilfracombe, the route travels along the A399 past Hele Bay and Combe Martin Bay before heading southwest to join the A3123 at Kentisbury, where you turn left. Upon reaching the A39, turn left and ride through Churchtown towards Lynmouth. If you are stopping for a break in Lymouth, you will find a nice selection of eateries along the harbour front. From here you head on to Lynton, passing close by the stunning Valley of the Rocks before emerging in the coastal town. Back on the A39, keep heading east, following the coast. It is pretty much a straight run to Minehead, passing to your left the lovely Exmoor Heritage Coast. At a junction with the A396, it is worth taking a deviation right to Dunster, where you can visit Dunster Castle.

If you want to make a big circle and continue to enjoy a splendid day’s riding, continue south along the A396 and upon reaching Wheddon Cross, turn right on to the B3224, taking you through the centre of Exmoor National Park. Pass through Edgcott and Simonsbath, continuing to Challacombe where to your left lies Shoulsbury Castle. At Stowford, turn right on to the A399 and continue north back to Ilfracombe, our starting point.

Route 3: Slapton Sands to The Valley of the Rocks

This is the longest run of the three. It might only be 150-odd miles, but it’ll easily take you five-and-a-bit hours because of the steady pace out on Dartmoor and Exmoor (there’re 40mph limits across a lot of the moorland, to help protect the sheep and horses that are roaming free). If you really want to make the most of the spectacular scenery and picturesque towns and villages, you’d be far better off taking two days to tackle this one. You’ll be able to do it in a single day… but that’s not what we’d suggest. There’s plenty to see and do, so there’s little point in rushing your way through if you can afford to take a bit more time to enjoy it.
It’s essentially a coast to coast route starting from Slapton Sands in the south of Devon, ending up at The Valley of the Rocks near Lynton in the north, passing through both Dartmoor and Exmoor National Parks on the way. Once you leave the A38, much of the first part of the route is tight and twisty and extremely rewarding as you wind your way up to the famous B3212 that cuts right through the centre of Dartmoor, passing through Princetown on the way. From there you’ll pass through Widdecombe on the Moor, Moretonhampstead and Chagford (all great places to stop for a brew, a bite to eat and stretch of the legs), before leaving Dartmoor and taking a slightly more direct route up into Exmoor. The middle section isn’t the most exciting (and more scenic routes are available), but it’s all about making decent progress and getting into Exmoor as quickly as possible. The moor here is a bit more open, with some smoother and faster stretches of road to enjoy as you make your way up to Minehead where things really start to get interesting when you join the A39 that leads you all the way to Lynton and beyond. This is one of the best stretches of road in the country – fast, free-flowing and fun. On a sunny day you’d be forgiven for thinking you’d been transported to Sardinia, but no, this is Devon in all its glory. There’re several places to stop along the road, with ice cream vans and spectacular seascapes offering all the excuse you’ll need to take a few minutes for yourself – but there would be no harm in riding the road one way in full and then turning around and coming back again. It really is that good.

As with files given freely by any source, always check the journey before you leave, and use common sense when following. Happy travels…

Buy a digital or print edition Subscribe to MSL