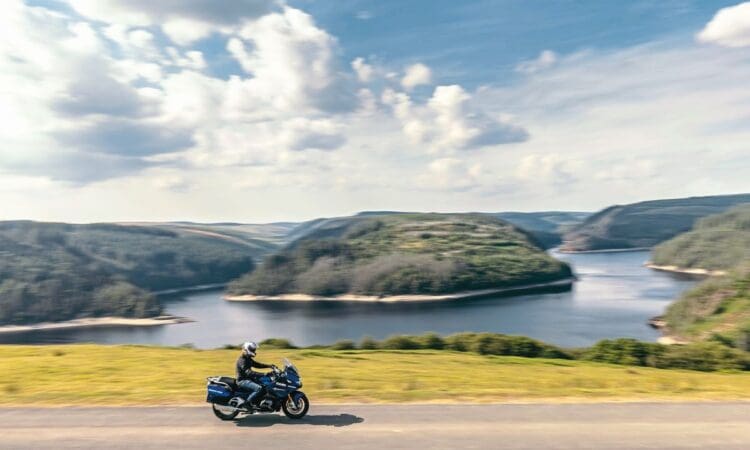 Wales offers some spectacular riding for anyone on two wheels. Here we highlight our favourite places to ride, with an option of combining them into one big ride.

What could be better than enjoying a ride around the enormous bulk of Mount Snowdon? Starting from Caernarfon, join the A4085, which will take you into the foothills. As you crest the hill having past Rhyd-Ddu, make sure you glance up left over the mountain’s flanks and you should be able to spot the summit café if it’s a clear day. Having arrived in Beddgelert, head left along the A498 and left again for a different perspective of the summit, this time being more jagged and triangular, and set amongst a horseshoe of cliffs.
Once at Pen y Gwryd turn left and you will ride through Llanberis Pass. It is here, at Pen-y-Pass, which marks the start of Mount Snowdon’s most popular hiking routes. From here it’s a pleasant ride downhill to Llanberis and back to Caernarfon.

A lap of Snowdon is just a little taster of what this area has to offer. You can easily extend the ride by heading to Betws-y-Coed on the A4086 and the A5. From this beautiful, but busy town you have a couple of great options if you want to return to Caernarfon. You can take the A470 to Blaenau Ffestiniog over the Crimea Pass and enjoy the faster road with the dramatic slate-stone scenery. Or you can carry on a little further east on the A5, then take a right towards Ysbyty Ifan on the B4407. This is a much smaller road, with lovely mountain views.
At the end of the road turn right towards Ffestiniog and Beddgelert if you want to return to Caernarfon, but don’t miss the Cwm Cynfal viewpoint soon after you have joined the B4391.

Route 2: Between the Parks

Should adventure bikers fancy a desperately lonely stretch of rough single track which runs from Llanwrtyd Wells to Tregaron, then this should suit admirably. You will pass through a brutal, wild landscape of moorland, pine forests, streams and escarpments, and as you reach the middle you will encounter a steep series of hairpins, appropriately called the Devil’s Staircase. You will be covering around 20 miles where every single one will require concentration, and you are more likely to come across more sheep than people, so if you like the feeling of being in the middle of nowhere and love a challenge, then this is definitely one for you. Don’t expect it to be a fast ride, and it might be preferable to tackle it on a trail bike, but the scenery makes up for everything, whatever you ride. Many a biker enjoys the run from the southern end as the hairpins are that much more fun, and there is an excellent section of road up the Abergwesyn Valley for a small sports bike, but adrenalin junkies should tackle the ride both ways.

No one can deny that Wales opens itself to some fantastic riding routes with stunning backdrops. One of the most popular and talked about is the Black Mountain Road in Powys along the A4069. Despite it running to only 15 miles, it reaches a jaw-dropping height of 1671 feet above sea level and is well worth ticking off your bucket list. Whichever way you look, either ahead, sideways or in your mirrors, enjoying twists, dips and rises whilst taking in the picturesque views, it is an extraordinary way to enjoy the Brecons. This is where Jeremy Clarkson was famously filmed driving it, which is why it became known as ‘the Top Gear road’.

It is recommended that you tackle the Black Moutain Road from north to south, especially the hairpin known locally as Tro Gwcw, or ‘Cuckoo Turn’, although the views of the Tywi Valley are perhaps best viewed in the opposite direction. The paved road crosses the Black Mountains from Llandovery to Gwaun-Cae-Gurwen and includes some spectacular, if challenging, hairpins. Also, be aware of sheep which may well be roaming across the road, and don’t forget the ice cream van at the top.

The Vale of Ewyas, a long, narrow, steep-sided valley in the Black Mountains towards the eastern edge of the National Park, is followed by a winding, mostly single-track paved road known as the Gospel Pass. Beyond, the land slopes steeply down to the rolling farmland of the Wye Valley, while at either side rise the adjacent, flat-topped peaks of Hay Bluff to the northeast and Twmpa to the southwest. Most of the valley is part of Monmouthshire but the northern few miles, including the pass, are in Powys, and the ridgeline to the east, extending south from Hay Bluff, marks the boundary between Wales and England. One tradition holds that the name of the pass is a reference to a visit over 2000 years ago by Saint Paul, who crossed this part of Wales whilst preaching the gospel. It is, however, more likely to derive from a band of Crusaders who visited this location in the 12th century.

The Gospel Pass lies just inside the eastern border of the Park and is the highest road in Wales, plus one of the most scenic in the UK. Abergavenny and Hay-on-Wye lie at either end and make for great stopovers. The single track road runs for 22 miles with an average 1 in 4 gradient. The seemingly unnamed road up the Vale of Ewyas branches off the A465 five miles north of Abervanneny at Llanvigangel Crucorney and heads north along the valley floor close to the Afon Honddu, a small river. After six miles it passes the evocative ruin of Llanthony Priory, beyond which the road is a little less used, narrower and nearly all single lane, albeit with regular passing places. After 10 miles it reaches a junction at Capel-y-ffin, at the mouth of a small side valley to the west, then after 11.6 miles as the gradient increases the road leaves the woods and farm fields beside the river and enters open moorland, climbing yet further over the next half-mile to the pass. The land is much steeper beyond and the road takes a slanting, downwards route cutting across the slope to the north then descending more gently towards Hay-on-Wye. If Hay happens to be your starting point, the quiet route south to reach the Gospel Pass takes a bit of navigating down side streets on the edge of town. Once on the slow climb out of Hay, you are quickly on pretty much a single track road with hedgerows obscuring much of the view. Five miles later and the road opens out on a spectacular plateau 500 feet above sea level, revealing a stretch of hills and valleys as far as the eye can see. Once over the Pass and into Abergavenny, the pleasant market town offers plenty of refreshment places and B&Bs.

Route 5: The big one – all routes combined into one great Welsh ride

Starting from Betws-y-Coed, ride towards Caernarfon on the A5, turning left on to the A4086 at Capel Curig, heading ever upward, past the Llynnau Mymbyr and Nant-y-Ilys lakes, with the option of turning right and heading over the Pen-y-Pass to Llanberis if you fancy either of the options of climbing Snowdon (walking or by train). Continuing on the A4086, drop down to picturesque Beddgelert, leaving on the A498 and then A4085 through ancient wooded valleys alongside whitewater streams.

Turning left on to the A487, the scenery opens up, as does the road, joining the A470 past the Trawsfynydd Dam and hydroelectric power station and thence through Coed-y-Brenin forest park. There’s some stupendous mountain biking here, if you fancy some self-powered two-wheel action.

After passing through Dolgellau on the A470, bear right on to the A487, heading for Machynlleth. This is the road that takes you through various valleys that are colloquially known as the Mach Loop, famous for the pictures of military aircraft flying at low altitude. The planes only fly from Monday to Friday, and not on Bank Holidays, and even if you don’t go to the effort of climbing up the valley sides to get a viewpoint that is actually higher than the planes flying through the valley, it’s still an impressive spectacle!

Upon reaching Machynlleth, join the A489, and then the A470, a fast and flowing route through Llandiloes, Llangurig and Rhayader to Builth Wells, which is a useful watering spot for bikes and riders alike, before heading out on the A483 towards Llanwrtyd Wells. When in Beulah, take the right-hand turn just after the B4358, to head for Abrgwesyn and then the Devil’s Staircase. This incredibly quiet road through a stunning landscape is something of a secret, so don’t tell your friends, but enjoy it in secrecy! The road splits, so follow to the left, past the picturesque Llyn Brianne reservoir and then the Celtic rainforests of the Gwenffrwd-Dinas RSPB Reserve, before eventually rejoining the A483 and into Llandovery.

Riding out of Llandovery on the A4069 takes you to the Black Mountain Road, aka ‘the Top Gear road’, as detailed on pages 16-18, which will take you through the Brecon Beacons to Brynamman, the southern edge of the Brecon Beacons and a mere spit away from the south coast of Wales.

From here, you can ride the more congested and speed limited roads eastwards via Ystalyfera and Glyn-neath, on to the A465, via Hirwaun and bypassing Merthyr Tydfil and Ebbw Vale, on to Abergavenny, and then continuing on the A465 before turning left at Llanfihangel-Crucorney and on to the bottom end of the epic Gospel Pass (see pages 20-22).

After completing the Gospel Pass, it is only a couple of miles into the centre of Hay-on-Wye, known not only for its multitudinous bookshops, but also the pleasant cafes, pubs and restaurants just waiting for your trade after a long day in the saddle.

As with files given freely by any source, always check the journey before you leave, and use common sense when following. Happy travels…

Buy a digital or print edition Subscribe to MSL