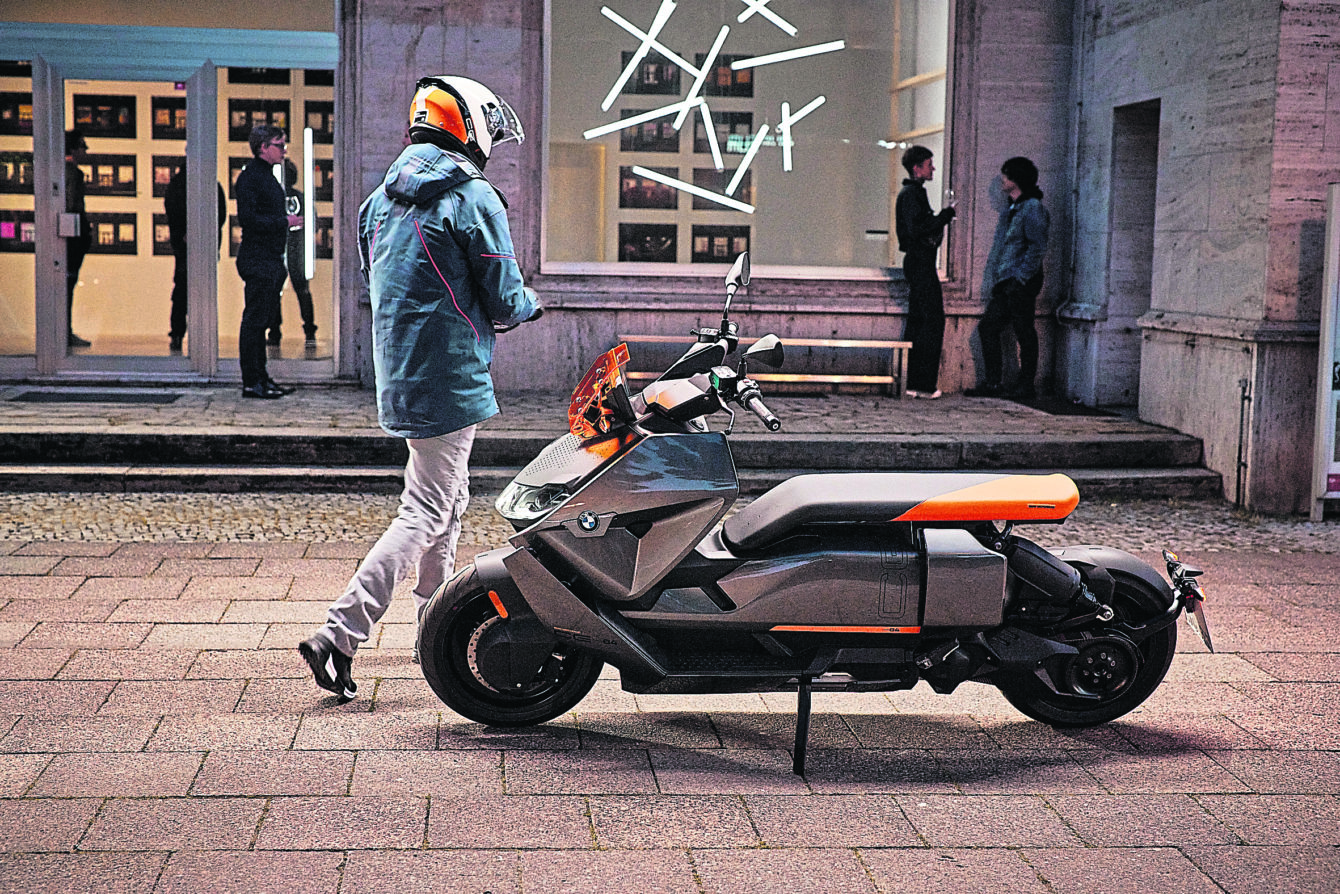 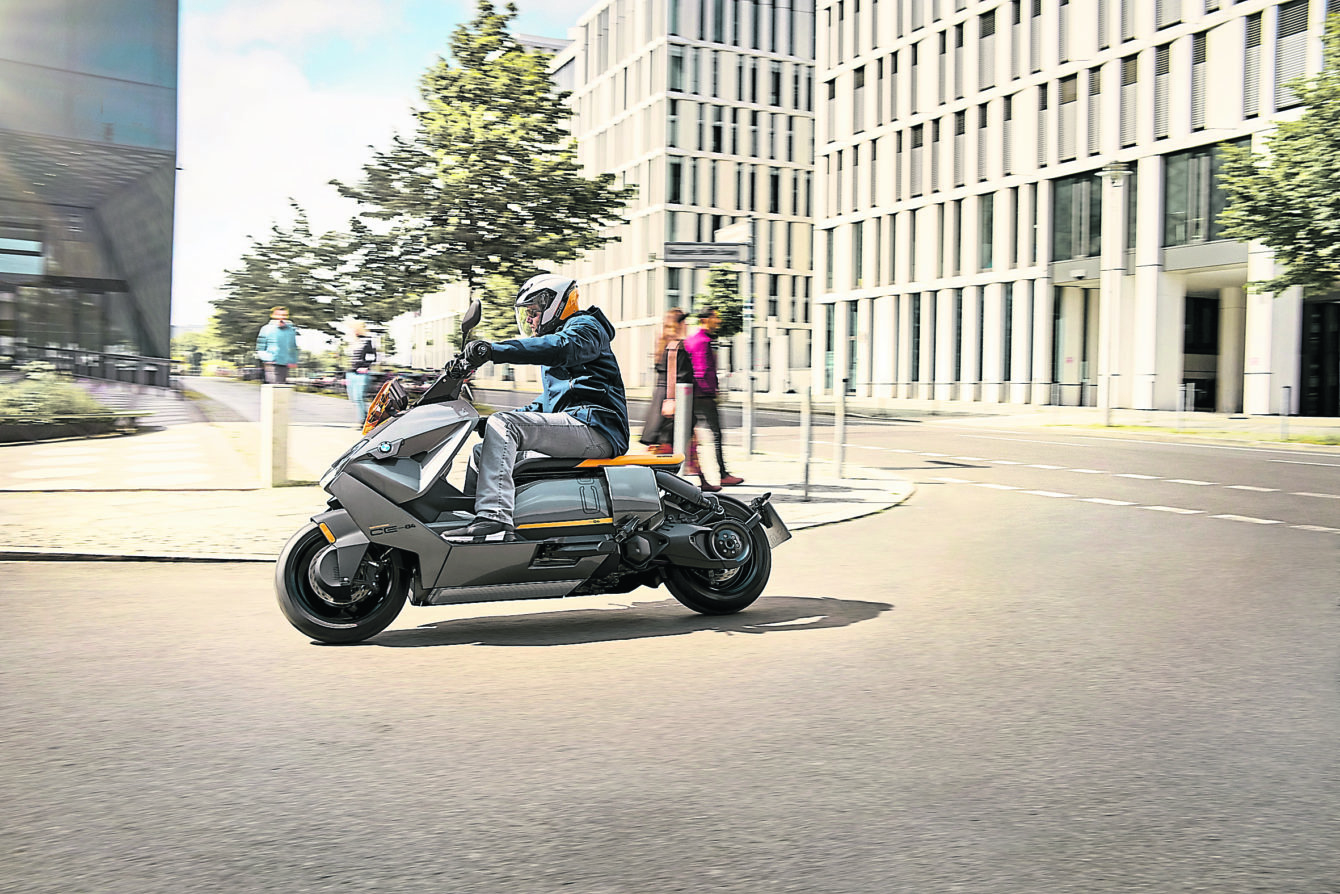 BMW led from the off in the production of electric scooters with the C-Evolution, which was officially launched back in 2014. Now, for 2022, the German manufacturer has taken another significant leap forward with the futuristic CE 04.Clearly, the two-wheel division of BMW has nipped around the corner to the four-wheeled department and borrowed its technology, because the CE 04 uses smaller versions of the car battery cells used in the iX car range.

Not only has this cunning move kept development costs relatively low, but also ensured reliability and safety while keeping BMW Motorrad one step ahead of some its closest competition, such as KTM and Ducati.

BMW has also let its designers run wild. Unconstrained by the conventions of traditional engine placement or exhaust routing, they have come up with a visual treat. I posted images of the CE 04 on my social media and it provoked a vociferous love or hate reaction, exactly what designers looking to make an impact want. Having spent a whole day absorbing its form and detailing, I love it; this radical scoot looks even better in the flesh.

More than a styling exercise

The CE 04 is as practical and usable as it is stylish. The all-important 100 per cent charging time is four hours 20 minutes from a regular household socket, or one hour 40 minutes with an optional fast charger (£850). A 20-80 per cent charge takes just 45 minutes with the fast charger or one hour 40 minutes from a regular household socket. 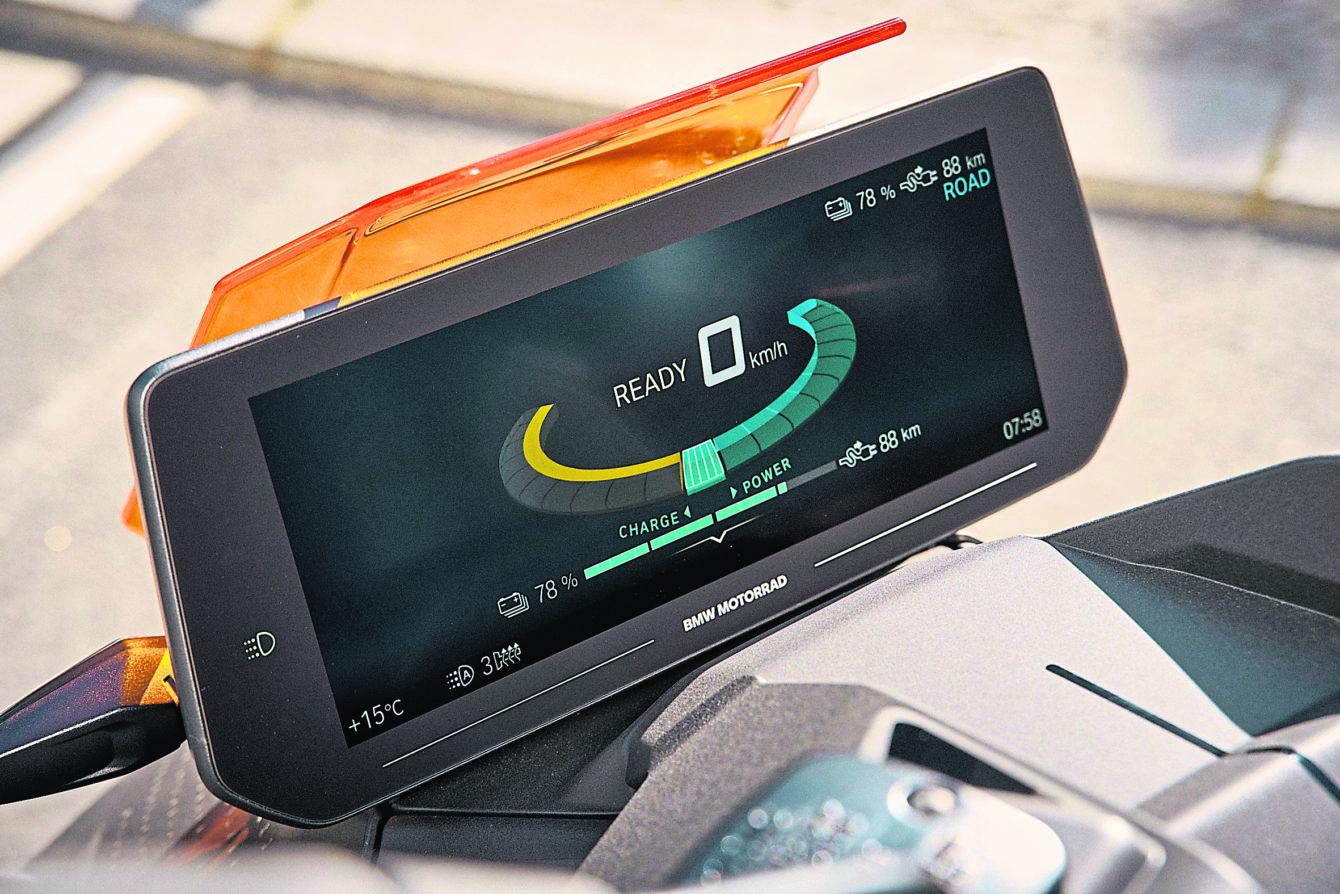 Three riding modes – Road, Rain and Eco – come as standard along with ABS and traction control (TC). Opt for the additional Dynamic package (£380) and your CE 04 receives an additional riding mode, Dynamic, plus adaptive headlights, while the rider aids become lean sensitive, meaning both the ABS and TC protect the CE 04 against a locking or spinning wheel even when it’s banked over in corners.

Most conventional petrol scooters have a removeable or hinged seat that allows access to under-seat storage, but the CE 04 is different as the seat is fixed. There is enough storage for a full-face helmet, which is neatly accessed from the side like a large pannier or huge glove box. Upfront there’s an additional splash-proof storage compartment for a mobile phone that is cooled by an electric fan to prevent your device overheating. The charging point is on the right, opposite the phone compartment, while the ignition and both storage compartments are all keyless and lock automatically as you leave the bike. And, as you’d expect, the 10.25-inch full-colour dash has connectivity, as well as integrated map navigation.

Time to hit the streets of Barcelona

That TFT dash shows you’re ‘ready’, so you simply twist the throttle and go – just like a conventional modern scooter, but in blissful silence. Torque and acceleration are instant (peak torque is at just 1500rpm), and you drive seamlessly away. As well as the three riding modes, our test scoot also had the optional Dynamic mode fitted. Each mode has a different throttle response and engine brake strategy, which regenerates energy back to the battery. Eco, for example, is very soft, with maximum battery recuperation and strong engine braking, while Road delivers full acceleration and dramatically reduced engine braking and regeneration. Dynamic mode gives enough oomph to embarrass most motorists from the lights, the traction control activating from time to time over slippery white lines and cats eyes. In the UK’s cold and wet riding conditions, the traction control will have to work harder than Boris Johnson’s party planner.

Acceleration from a standstill is brisk, to say the least, and out of town the CE 04 is happy to whizz up to an indicated 100kph (60mph) without hesitation. This is a surprisingly quick commuter; it’s effortless and easy, so you’ll need to keep an eye out for city speed cameras that could easily catch you out. The downside is that using the CE 04’s rapid acceleration and natural pace through town will reduce the claimed 130km (80-mile) range. That said, after 60km (40 miles) of fun riding, the display on our test machine still showed a range of60km remaining. 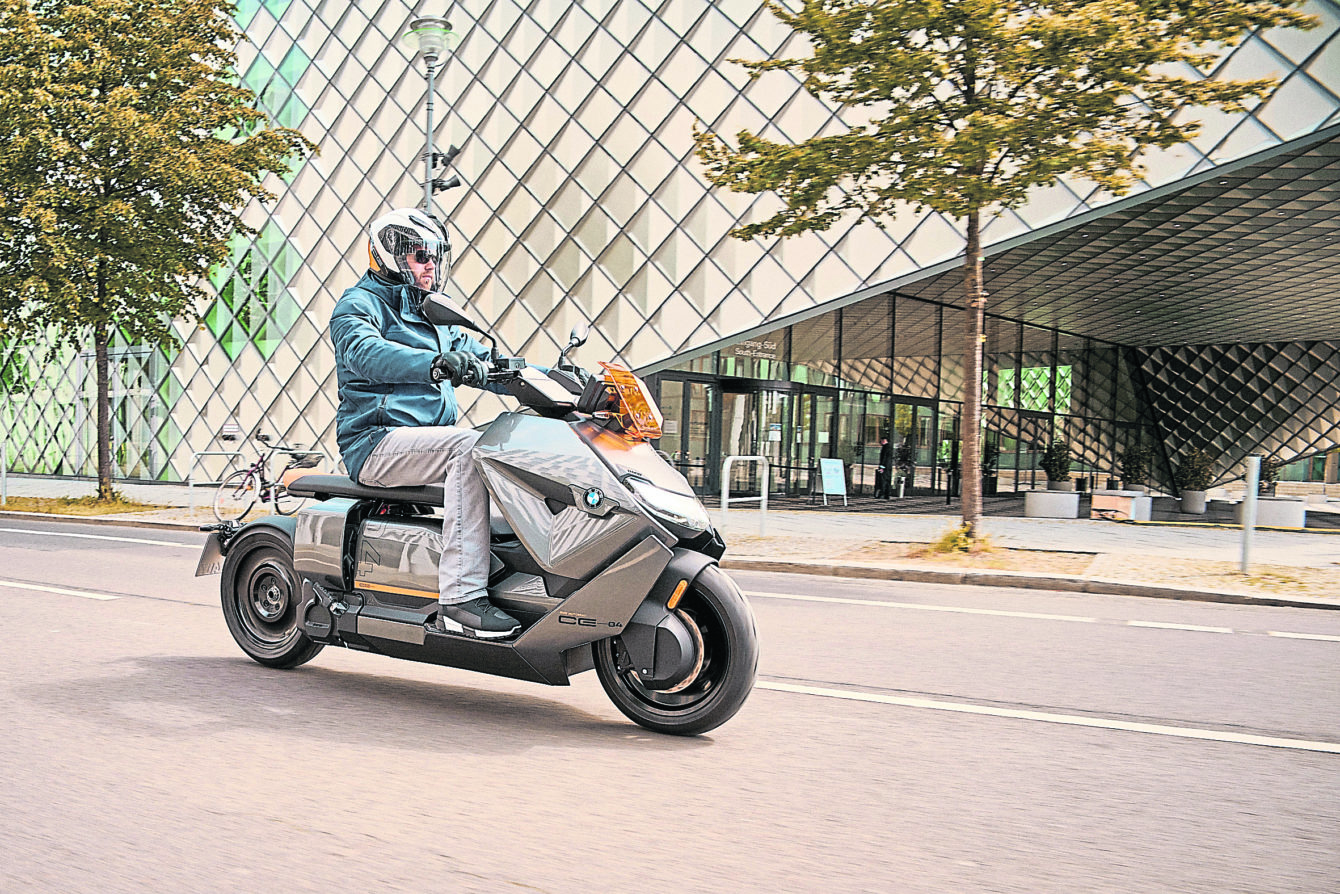 Lighter than the old C-Evolution

Compared to the noticeably heavy C-Evolution of old, the CE 04 is a relative lightweight. It tops the scales at a respectable 231kg, although it remains 25-30kg heavier than a conventional petrol equivalent. The German designers have cleverly placed all those kilos low in the chassis though, with the battery cells running horizontally mere inches above the road, which enables the CE 04 to feel much lighter than its on-paper weight suggests (and helping with air-cooling, too).

The CE 04 flows, almost swings, through traffic and is narrower than a conventional scooter, especially at the rear, making it easy to carve through rush-hour traffic in perfect silence. The ride from the Showa suspension is a little firm, but the seat is comfier than it looks.

The CE 04 is A2 licence-compliant and can be restricted further for A1 licence holders. The 780mm seat is higher than BMW’s own C 400 X scooter, but its thinness makes the CE 04 accessible for shorter riders, and a reverse gear comes as standard, which allows you to slowly crawl the bike backwards out of a parking space. 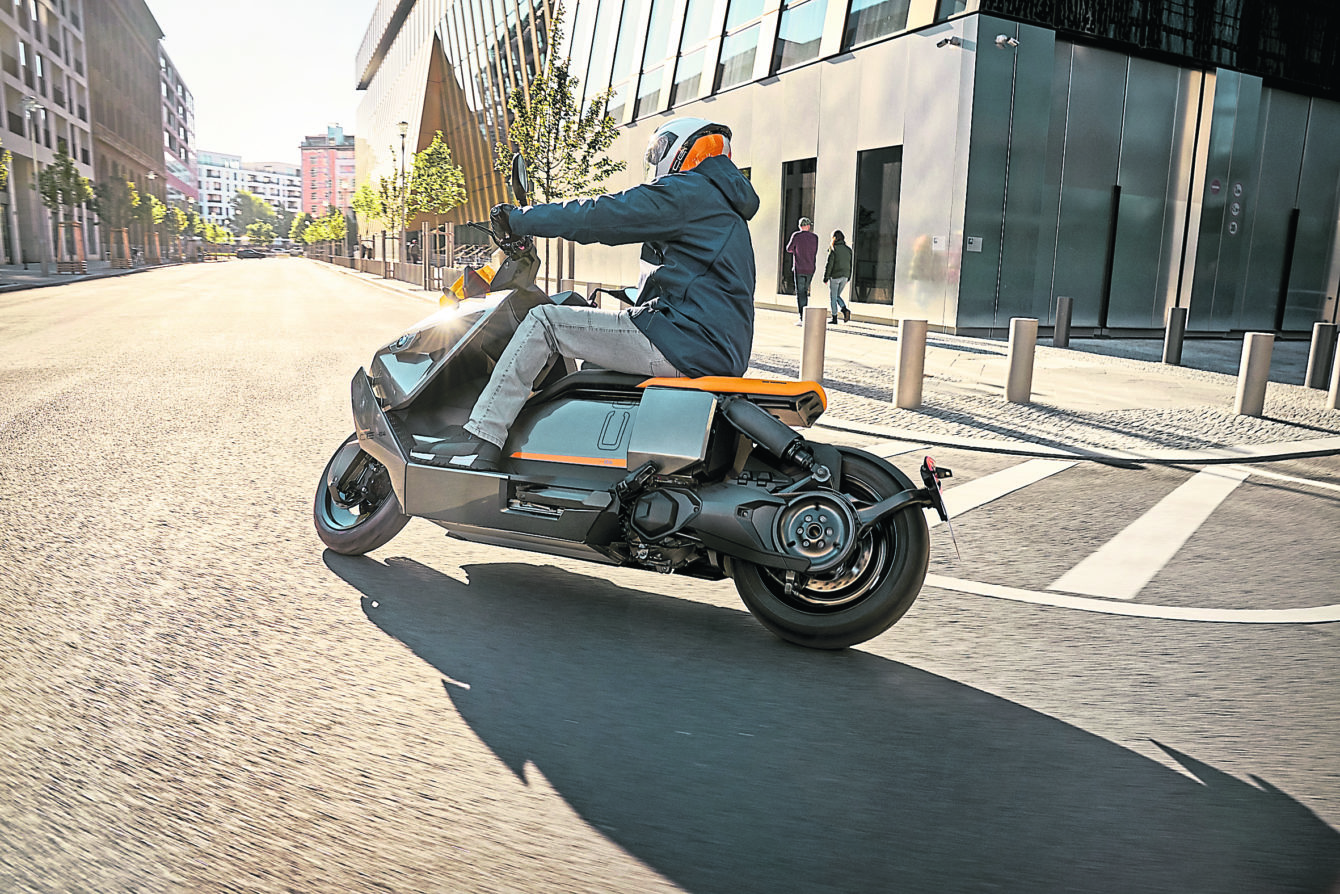 Don’t look at the price tag

If money is no object, then I’d suggest the CE 04 over any petrol equivalent… yes, it’s that good. The BMW is more entertaining with rapid and silent acceleration; it is simpler to commute through the urban jungle thanks to its slimness; comes with a reverse gear; and is packed with style and tech. It’s a work of genius of style and engineering. It’s hard not to fault, but there is the small matter of price.

£11,700 is a hefty price to pay for the equivalent of a 400cc scooter, and you really need the fast charger, which is an extra £850, and the Dynamic Package, which is £380. Our test bike is more expensive than a base BMW R 1250 GGS. But arguably BMW customers wanting a head-turning commuter to sit next to their £69,905 iX won’t think twice about £137 a month and free commuting. Attractive PCP and free commuting in style will tempt some.