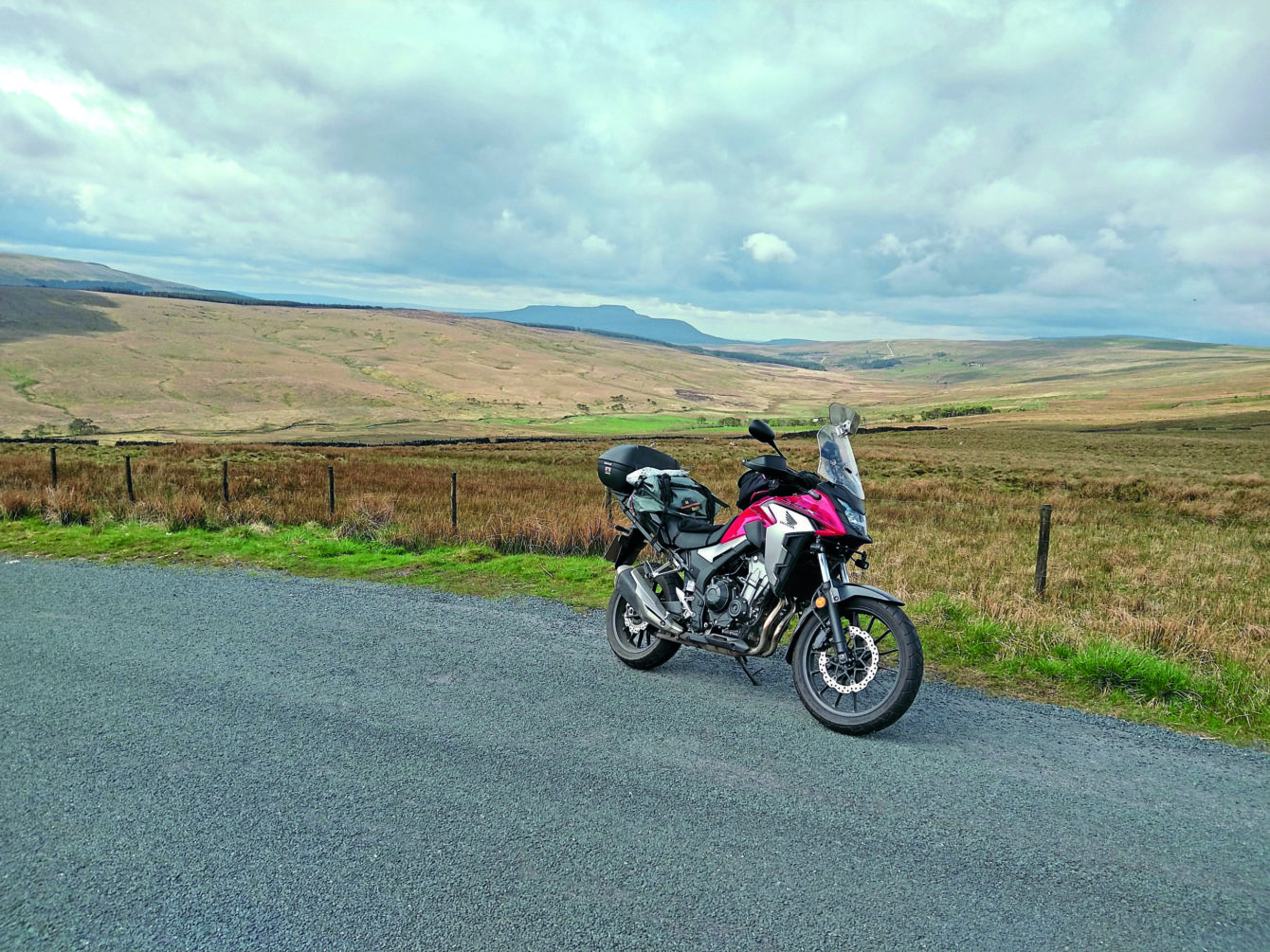 There’s some fantastic riding to be done on the empty roads of the Scottish borders.

Every year my brother and I like to escape domesticity and go for a bike tour. We ride very different machines – Silverwing scooter and CB500X respectively. Given his extra weight we are roughly equal in power, but he has to work harder to keep up on the twisties. And rather him than me on the Silverwing, as those little scoot wheels terrify me, with no fuel tank to grip with your knees either.

Never mind, we had decided that on this visit to Northumberland we would look at some new roads as well as going over some old favourites so set off from our base (the Bay Horse at West Woodburn, a friendly and not too posh inn) for St Mary’s Loch.

We knew it had a cafe so, of course, as a member of the TDMCC pie-eaters club I felt this had to be a worthwhile destination.

The first stretch was straight up the A68 to Jedburgh. There we fuelled up before doubling back and turning right on to the B6357 for a fantastic ride down a quiet road with some interesting corners, ups and downs. At Bonchester Bridge we took the B6088 and carried on northwest, through some absolute belters of bends before taking the A698 into Hawick for our first coffee. We were, of course, now in Scotland where the snacks are excellent!

A stroll around revealed the statues to young Scots who saved the honour of Scotland after a hammering by King Edward by ambushing and killing a band of English marauders. Folk seemed very friendly these days, though.

Leaving Hawick via the A7, we headed southwest and turned off on to the B711 for a glorious roller-coaster of a ride. This is technically the flat bit of Scotland, but you could have fooled me. It’s perfect on an adventure bike and little brother was having a ball on his big scooter as well.

At the junction with the B709 we turned right and headed to Crosslee where we went left, round a tight turn where I nearly had a coming together with a van on the wrong side of the road. The driver looked surprised. I don’t think the road is heavily used and he probably takes that same line every time. Anyway, I passed the swerve test, avoided the potholes at the edge of the road and carried on.

Eventually, after more miles of empty, fast and technical roads we reached the A708. The main hazards on this one were the sheep with lambs who had not yet learned road sense – Yorkshire sheep are far more traffic savvy. A swift run down the A708 brought us to St Mary’s Loch and a superb run down the side of the loch to the Glen Cafe. This is a well-known biker destination and sure enough, while we were there a variety of bikes turned up with riders from all over southern Scotland and northern England. We were the only tourists though, everyone else was just out for the day.

Refreshed with a fine bacon bap and a cuppa we retraced our route as far as the junction with the B711, but this time carried on down the B709. Fun but challenging sums up this stretch, thanks to a variety of surfaces and the occasional timber lorry. It also varies from narrow to very narrow and it is full of twists, turns and surprises.

The biggest surprise was the Tibetan monastery, which is not what you expect to see in the wilds of Britain. Unfortunately, it was closed due to Covid, so we were unable to drop in for a spot of meditation.

Instead, we carried on to the A7 at Langholm for a short distance before turning right and up into the hills on another wonderful and empty bit of Tarmac heading to Newcastleton. We passed two curious monuments on our way and stopped for a look at one, which turned out to be a memorial to the poet Hugh MacDiarmid, sculpted by Jake Harvey. The other was a 100ft obelisk commemorating Sir John Malcolm, a local worthy from the 19th Century who apparently achieved great things in India. From Newcastleton we followed the B6357 for a while until the turn off towards Kielder Water. This road was initially a typical border route, twisty with a variable surface and random sheep, but then it morphed into a superb piece of Tarmac as it ran through Kielder Forest and alongside Kielder Water – a place to make progress, it’s fair to say. There is also a fuel stop here, by Kielder Castle Visitor Centre, and a cafe at Tower Knowe Visitor Centre where we stopped for afternoon tea, admiring the views over the lake.

The road continues, in splendid wiggly fashion, following the River North Tyne until it reaches Bellingham. There is a filling station here which will make you wish you had filled up at the Kielder stop as it is eye-wateringly expensive! Never mind, we carried on up the hill along the Pennine Way, another belting road that eventually emerges at West Woodburn and the Bay Horse. We parked the bikes and staggered up to our room to change and have a cup of tea. I threw myself on my bed… which collapsed. Cue much laughter from little brother. He wasn’t laughing later when they put me in the five-star honeymoon suite and left him with his single bed in our twin room! 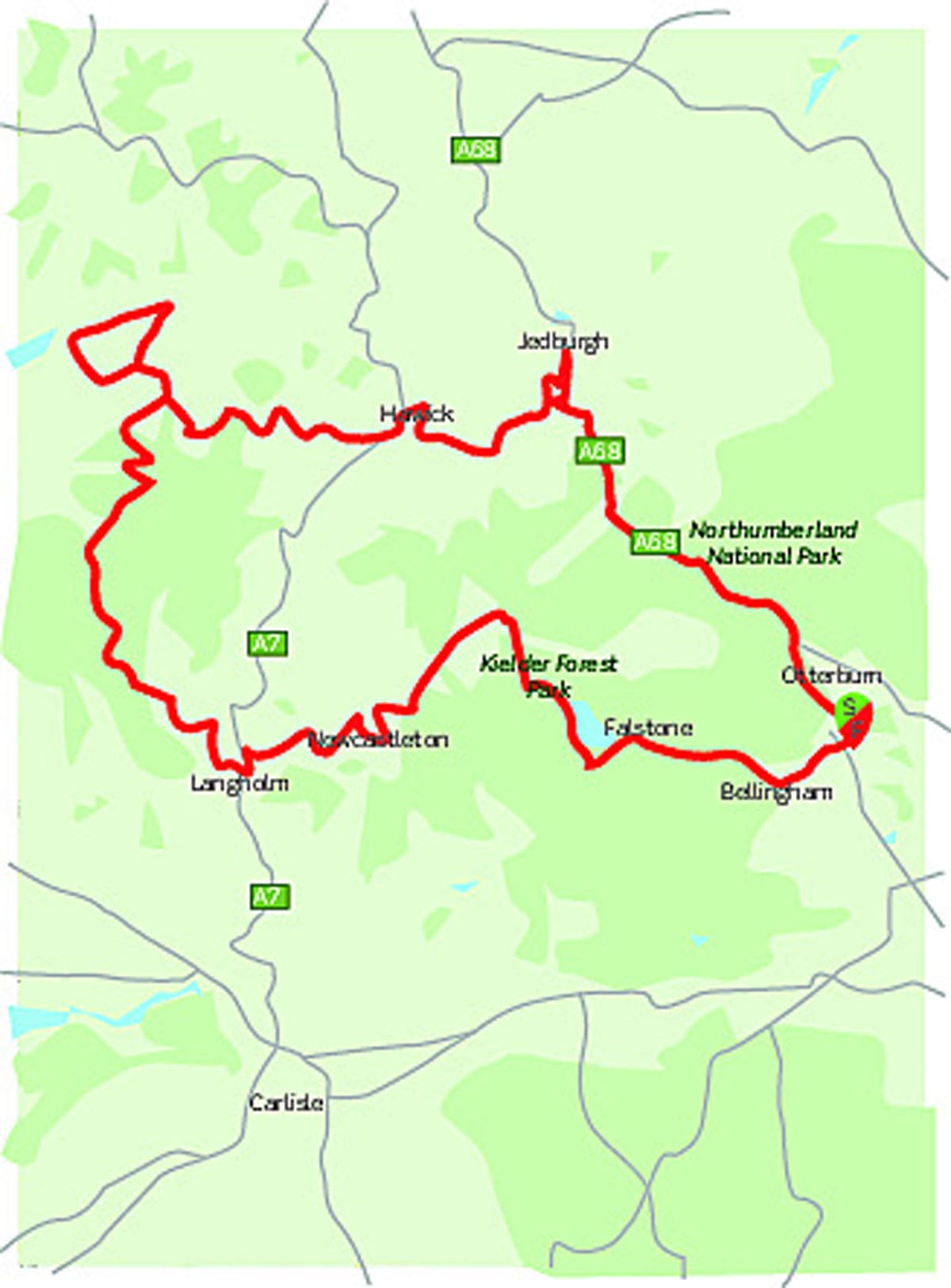 I could write a lot more about this trip, of which this ride was just one day – every day was different, and the weather was perfect. Our final day together was riding down to Hawes and then Grassington where brother rode west to his damp Lancashire home, and I headed back to domestic bliss in West Norfolk. Next year we are off to Scotland, but not by our usual route. More fun awaits…