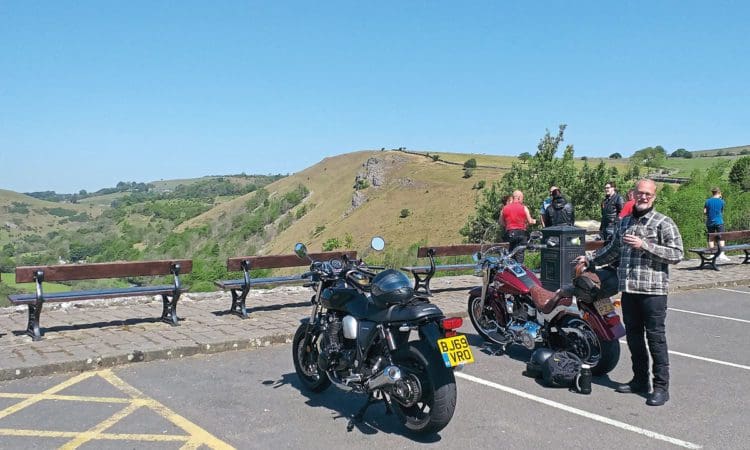 With Covid-19 causing an inconvenient but necessary forced break in our spring shakedown and ride-outs, I decided that once the first lockdown had been relaxed a little I needed to get out for a ride. Quite apart from that, it was the hottest May on record. So, with social distancing still very much on our minds my mate Kev and I went out on a day ride. We were focused on the White Peak part of Derbyshire, so-called because of its limestone geology, and apart from the obvious pleasure of riding a motorcycle, I wanted to show Black Country boy Kev the Derbyshire countryside and the engineering of the long-gone railways in these parts.

Turning up on my new Honda CB1100RS, I met Kev (and Harley Fat Boy) at a popular bikers’ café on the A518 near the ruins of Chartley Castle – Mary Queen of Scots was allegedly held prisoner here before her execution in 1587. The road to the Peaks here is busy but nice to ride from Stafford to Uttoxeter on the Staffordshire/Derbyshire border.

After a quick four-mile blast along the A50 towards Derby we turned off on to the A515 and the town of Ashbourne, gateway to the Peak District. Leaving town and passing through the quaint, stone-built houses of Fenny Bentley village we found ourselves climbing up and into the White Peak.

We passed under a bridge that once carried the railway from the spa town of Buxton to Ashbourne and is now part of the Tissington Trail, popular with walkers and cyclists.

The A515 winds its way steadily towards Buxton, with sweeping bends and some dips thrown in for good measure. Like most roads in the Peaks there is a blanket 50mph speed limit which is heavily policed, especially at weekends. (I wonder what caused that to happen?) With roads and speeds like this, something like an Enfield 650 interceptor is an ideal choice of bike. To go any faster would be missing the point of this ride because the views are superb, with distant vistas over dry stone walls to fields full of rather  hardy sheep.

Passing over Gib Hill, near the Hamlet of Parsley Hay, there’s the prehistoric Henge of Arbour Low on your right. Gib Hill itself is a large burial mound and a bit eerie to ride past at 3am, as I have done once or twice. Arbour Low is a stone circle, an English Heritage site, so it’s open to the public for a small fee.

Should this not catch your imagination, carry on to the B5055 on the right, signposted Monyash. Take that road, and you find another quaint village with a sandwich shop and pub, popular with bikers, walkers and cyclists. Carry on through the village and you soon reach Bakewell, famous for its Bakewell Tart (or Pudding, take your pick).

There is a viewpoint here, well worth stopping at because you can look down into the valley, taking in a fantastic view of the Monsal viaduct far below. This used to carry the Midland Railway on its heavily engineered route from Manchester to London via Matlock Bath and Derby, and now forms part of the Monsal Trail. Like the Tissington Trail, it is open to cyclists and walkers, and since 2011 six tunnels have been opened on this route; the viaduct disappears into the hillside below you into one of the tunnels.

Back on the bike, stay on the B6465 to the A623, turn left and after three miles left again through the village of Tideswell on the B6049. After a few miles you pass under the Monsal Trail, carried here by two impressive iron and steel viaducts. For a good view of those, about 300 yards beyond the viaducts turn right and climb the short but steep hill to the old railway station. There is a small café here, and a quick walk over the viaduct (only one is open for walkers) allows you to look down on to the road that you have just ridden, far below!

Crossing the border back into Staffordshire you pass through Longnor, Warslow and Oncote until reaching the A523 at Bottom House crossroads. Turn left here towards Ashbourne and at the bottom of the long hill, just before town turn right (signposted Mayfield).

Now follow the B5032/B5030 south towards Rocester, passing the huge JCB headquarters there. At the roundabout with the A50 you’re back on the Uttoxeter bypass and all you need to do is follow the signs for Stafford and the A518 to get back to where you started. In all the ride is just short of 100 miles and I enjoyed it so much that I did it all over again a week later, with my brother on his 22-year-old Suzuki 1200 Bandit.