Forget Trump, there’s a far nicer side to the US – the Rustic Roads of Wisconsin

Nobel Prize-winning author John Steinbeck wrote of Wisconsin: “Why then was I unprepared for the beauty of this region, for its variety of field and hill, forest and lake? I never saw a country that changed so rapidly, and because I had not expected it, everything I saw brought a delight.” 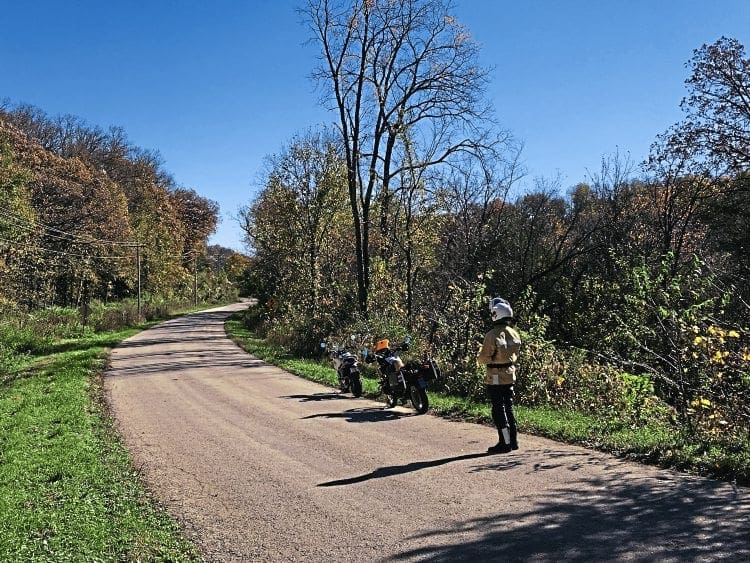 This is the Wisconsin I live in. And there’s no better place in the world I know of to take a leisurely motorcycle ride in the peak of autumn. Our state has various designated rural routes called Rustic Roads; winding, scenic and delightful byways whose only requirement is, ‘to have outstanding natural features along its borders such as rugged terrain, native vegetation, native wildlife or include open areas with agricultural vistas. They may be Tarmac, dirt or gravel and, in the words of the Wisconsin Department of Transportation, ‘are not scheduled for major improvements that would change their rustic characteristics: And the state has more than 700 miles of them.

Since it feels like it might be the last warm riding day of autumn, I convince my good friend and riding partner Eric Wainer to take a day so we can indulge ourselves. Eric has ridden his vintage 1990s BMW R100GS for nearly the entire 25 years I’ve known him. It was his enthusiasm that got me riding,  and eventually to purchase my F650CS a few years ago. I was in the market for a larger airhead twin, but couldn’t pass up the low price on a bike with just 2000 miles showing. Although the CS has been dubbed an oddball city bike by its many critics, I have fallen in love with it. Its sturdy Rotax engine goes on and on with little maintenance, the ride is comfortable, and the CS easily cruises the highways at 65-80 mph, if you don’t mind the buzzing seat at around 3500rpm. And for cruising up and down the country roads at 25-40 mph, it’s ideal.

The Driftless Region lies in the southwest of Wisconsin – a large expanse untouched by the various glaciers that weathered and smoothed the rest of the state over thousands of years. Because of this the area remains rugged and hilly, filled with winding country roads that carry your bike down breathtaking hills, making your ride feel like luscious thick cream poured from a warm bottle.

In Mineral Point, a small Welsh community nestled in the rolling hills, we fuel up with a scone and tea before heading south toward Rustic Road 66, through an area historic for its tiny lead-mining communities established in the early 1800s. Heading down County Road O, we speed past corn and dairy farms, hundreds of acres of feed corn and grazing land with views to the horizon that go on seemingly forever.

After an hour or so the flatness gives way to the abrupt hills and stunning beauty of the colours of the changing leaves – red, orange and bright yellow – which turn a routine trip into magic. We stop to stretch in Shullsburg, another small community, with old stone buildings built into the surrounding hills. We decide on lunch and I opt for a grilled cheese sandwich, made with the gooey, delicious cheeses the town is noted for.

After lunch we make the Rustic Road area, and it doesn’t disappoint. We wind even further down into a valley whose road follows a river lined with cattle farms and abandoned buildings, the latter the only sign that the area thrived during the mining boom 150 years ago. But now it’s peaceful and bucolic here, with old stone houses and towering grain silos that mark the local farms.

After an hour or so we head west and make our way to the Mississippi River, famous in folklore and the writings of Mark Twain. We stop for a rest and to view the massive bluffs that cascade down to the wide and powerful waterway that for generations has accommodated heavy shipping and travel from the far north to the Gulf of Mexico in the Deep South. And it’s only minutes away from our doorstep.

After wandering the shores of the river and chatting with fishermen we hit the road again, making our way through more small towns and villages – Sandy Hook, Dickeyville, Cornelia and Platteville. Further on there are more evocative names, like Maple Hollow, Stumptown, Pine Grove and Old Lancaster.

About five miles from home, Eric skirts down a back road shortcut. We ride for a few minutes, then stop, pulling into a gravel parking area next to a small river, almost hidden from the road. Standing on the one-lane bridge, we watch the last traces of sunlight dance away over the horizon. Eric comments on just how lucky we are to be living here, in one of the most beautiful, scenic areas of the state, possibly the whole country. How fortunate we are to walk out our door, jump on our bikes at a moment’s notice and ride through what we can only describe as a breathtaking, natural wonderland. I can do nothing but nod in agreement.

For more information on Wisconsin’s Rustic Roads go to: http://bitly/rusticroads