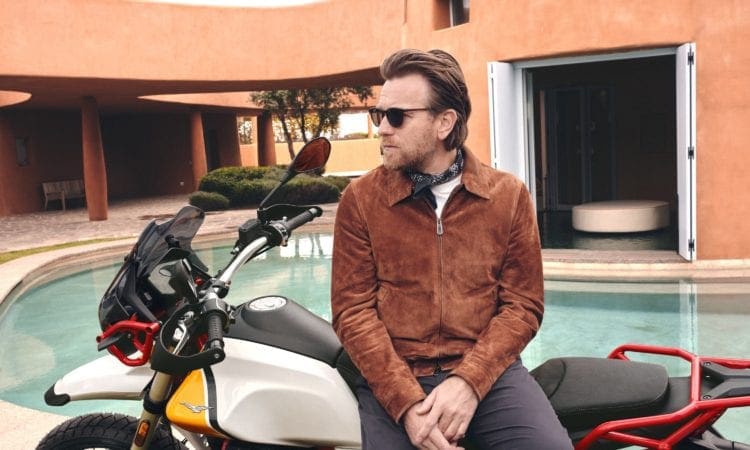 The Hollywood star, know to many bikers from the Long Way Round and Long Way Down riding documentaries is working with Moto Guzzi to help launch the V85 TT adventure bike.

The bike has been very well received so far – and who knows, maybe it could be used in a new series of Long Way… Fingers crossed!

Here are the full details from Moto Guzzi:

Ewan McGregor is back in the saddle of a Moto Guzzi, his age-old and authentic passion. The opportunity stems from the launch of the global advertising campaign for the new Moto Guzzi V85 TT, the all-terrain that bears the Italian brand in the large enduro touring segment.

This is not the first time the Hollywood star, one with a vast fan base, has matched his image and reputation as a truly passionate biker with Moto Guzzi. In fact, the first episode of this happy partnership dates back to 2013 when – in West Australia – Ewan was the protagonist at the launch of the new California 1400.

The relationship between Moto Guzzi and the Scottish actor is genuine and sprung naturally from McGregor’s love for motorcycles and in particular, those built in Mandello del Lario. Star of more than fifty films, including blockbusters the likes of Trainspotting, Star Wars, Moulin Rouge, Angels and Demons, The Impossible, T2 Trainspotting, McGregor had already talked about his passion for Moto Guzzi in road movie “Long Way Down”, when he made a stop in Mandello del Lario to visit the Moto Guzzi headquarters for the first time. A few months later, he reappeared on the banks of the Lario for the 2007 edition of GMG – Giornate Mondiali Moto Guzzi (Moto Guzzi World Days), returning to London astride his white California Vintage.

Today, the relationship continues with a collaboration which is unique in its kind, with Ewan McGregor the protagonist of the new launch campaign for the Moto Guzzi V85 TT, a bike that, as a true biker, Ewan – as is always the case – wanted to ride personally on the road before agreeing to take on the role of testimonial for it.

Making the production of the campaign even more charming was the location from which the actor’s voyage began astride his V85TT, the exclusive Resort Is Molas project, located in the splendid setting of Southern Sardinia. A true hermitage of uncontaminated natural beauty, this part of Sardinia has some wonderful views of the sea and the landscape of beautiful golf greens, a unique environment that welcomed and pampered Ewan McGregor and his Moto Guzzi on the departure and return from routes on paved and dirt roads in this little corner of paradise.

The photos of McGregor and his Moto Guzzi V85 TT were taken by Paolo Zambaldi for The Ad Store Italia agency which, directed by Natalia Borri, produced the campaign under the artistic direction of Luca Eremo.

Two months after its arrival on the market, V85 TT is confirming just how intensely awaited it was by riders everywhere: more than 10 thousand test rides were booked before the bike was even available, and the requests keep rolling in on the Moto Guzzi website. All the European countries are involved in the test rides and in terms of sales, the Italian, German, French and UK markets stand out with a demand far beyond the highest expectations.

Moto Guzzi V85 TT is the classic enduro dedicated to travel and tourism that provides ultra modern performance and technologies in a style rich in Moto Guzzi values and tradition.

V85 TT is built on a new technical platform and powered by a brand new 80 HP / 80 Nm engine, a 90° V-twin that is unique in the world for its construction layout and riding sensations. Comfortable, easy to ride, intuitive and featuring state-of-the-art chassis architecture, the new V85TT is a great traveller that adapts to everyone, gratifying both in everyday riding and on great adventures. It boasts premium standard equipment and there is an extremely vast range of accessories to satisfy the rider for every use, from daily commutes to touring to off-roading. The V85 TT comes standard with Multimap Ride by Wire throttle and traction control. Plus, the Moto Guzzi MIA application lets you connect your smartphone to the instruments, significantly expanding the functions.

Read the rest of this article in the July issue of Motorcycle Sport and Leisure, in the shops NOW! Click here to purchase your copy.

Want to know what we think about the bike? Read the launch ride report in June 2019 issue of MSL. Here’s a little taster.