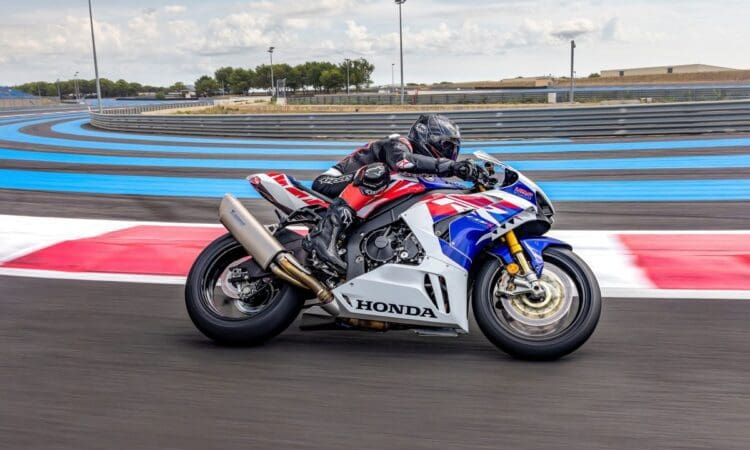 With a long line of significant model announcements already this year, Honda has today revealed its full 2022 European motorcycle line-up in Milan and the headline-grabber is the new CBR1000RR-R Fireblade, Fireblade SP and Fireblade SP 30th Anniversary.

To celebrate the original, ground-breaking Fireblade and 30 years of continuous challenges since the introduction of that 1992 game-changer, a stunning Limited Edition 30th Anniversary version of the Fireblade SP will be available in 2022 and unveiled at EICMA.

The iconic Fireblade has evolved into an incredible 1000cc sports motorcycle and has been the base of a competitive race machine, on short circuits around the world and the roads of the Isle of Man TT.

The Fireblade SP 30th Anniversary’s tricolour paint scheme has been designed by Hiroaki Tsukui, who was also responsible for the original 1992 colour design. Instantly recognisable, all the details are present and correct, with the ultra-modern feel of the 20YM stripe layout merged with ‘brushstroke’ style elements that pay clear homage to the seminal original. The blue rear seat continues the theme.

The Fireblade SP will also be available in two standard paint options, Grand Prix red and matte pearl morion black, both now with gold wheels, while the Fireblade itself wears an updated Grand Prix red paint scheme with prominent white number boards on the front fairing.

The changes are more than skin deep, with technical changes to the 160kW inline four-cylinder engine that focus on improving mid-corner acceleration and drive. The final drive sprocket also goes up three teeth, to 43, further boosting acceleration through each ratio. Honda Selectable Torque Control (HSTC) has been optimised for refined rear tyre traction management with input from HRC’s riders and the throttle feels even further refined.