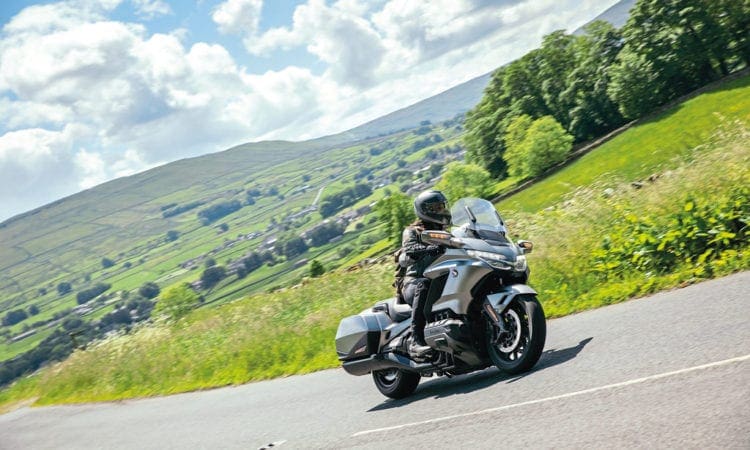 They might all be baggers, but the three bikes are hugely different. So which is the one to start saving for?

Dave Manning: Given my background and my associated affinity for customised motorcycles, I expected the Indian, with its hulking great air-cooled vee-twin and classic styling, to be my favourite. So how did I come to like the Honda the most?

Honda has been making the Gold Wing since the first four-cylinder model way back in 1974. The bike we have here is the 2019 GL1800. Essentially, it’s a shaved-down, lighter, more practical version of the better known full Tour model.

Whilst the screen is smaller than on the Tour Wing, the swoopy futuristic styling of the bagger still gives the best weather protection of the three here – the cylinder heads cover feet, the fairing shrouds (with all the lovely cubby holes) shield the legs, the mirrors protect hands and the height-adjustable screen is ideal for flipping rain and road spray over the top of one’s visor, albeit at the cost of increased noise.

She can’t half move for a big lass

Given the size of the thing, the fact that the handling is a little heavy will come as no surprise to anyone, but I like that in a bike, and the Honda is reassuringly stable.

And you can still make it hustle. It won’t corner as hard or as fast as the K1600, but it’ll still scratch the pegs happily, and there is an overriding feeling of stability, in that no bump, ripple or seam will divert the Honda away from your chosen line.

And the flat six engine is a classic. Copious power, with a silky smooth power delivery, means that it will pull from as little as 750rpm, while the low gearing means that it’s turning over at just 2500rpm at 75mph! But when given the beans, it still pulls its skirts up and rocks, with an astounding roar from the airbox reminiscent of a big-inch V8 truck engine.

The redline is low, at just 6000rpm, but this is one engine that feels like it’ll outlast fossil fuel. While the gearchange isn’t race-fast, it is smooth and positive.

READ: Get the full version of our guide to baggers as we test the Indian Chieftain, BMW K1600B and the Honda Gold Wing in the new October issue of Motorcycle Sport & Leisure.