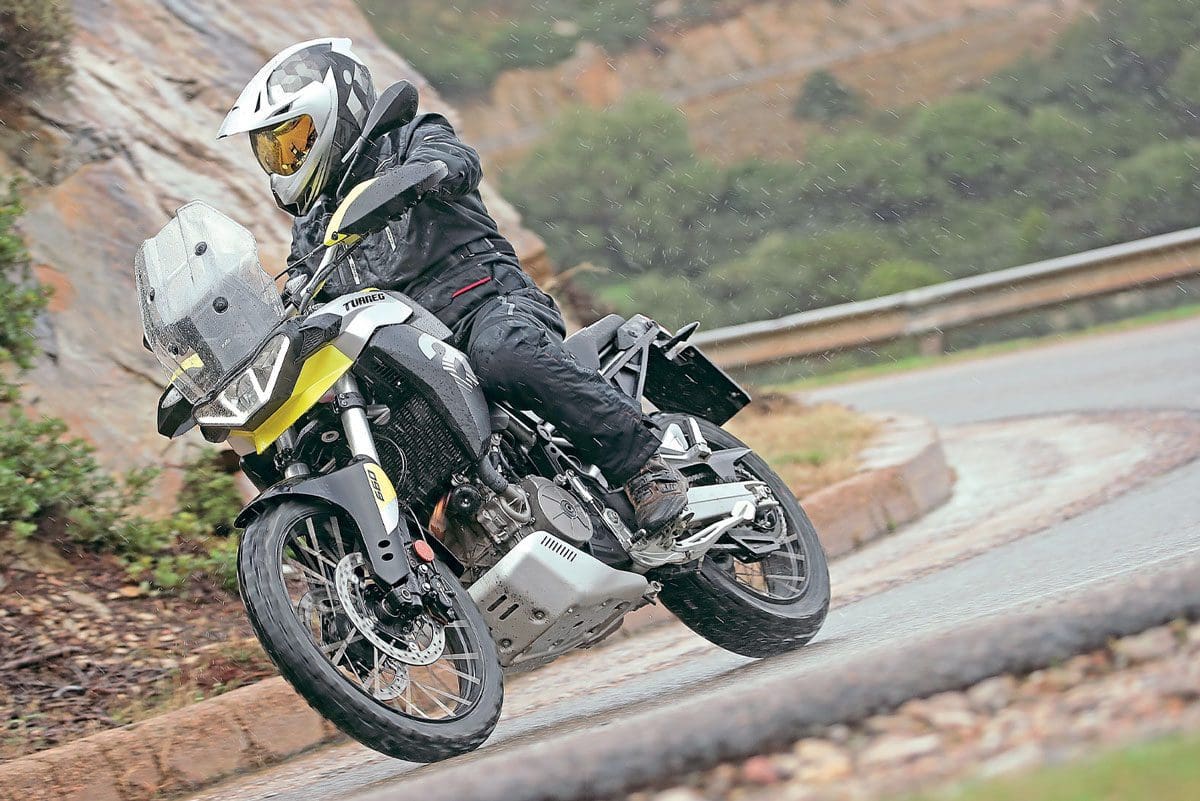 Aprilia springs back into the midrange adventure bike market with a thrilling twin that punches well above its size!

It’s been a fair while since Aprilia have had a midrange adventure bike in its line-up, and if you ignore the focussed mini-vee 450cc and 550cc dirt bikes, it’s over two decades since the Noale factory produced anything midrange that wasn’t focussed purely for the Tarmac.

Of course, the ‘soft road’ adventure bike market is a huge part of the motorcycling world in the 21st century. While Aprilia hasn’t had a Tuareg in the range for a while (the original was last in the range way back in 1994!), the large market segment that an adventure bike offers means that all manufacturers want to have a bike for this category in their range.

And, in the same way that the 660 RS and Tuono have slipped neatly into the Aprilia range and proved to be fiercely competitive against larger capacity rivals, so the Tuareg faces up to larger bikes in the adventure market, given that just about each and every model of that style is bigger than a litre in capacity, although the Tuareg will be squaring up to the very successful Yamaha Ténéré 700, the more road-focussed Triumph Tiger 800, and the new offering from Moto Morini, too.

With the increase in demand in the market sector, there’s also been an increase in ability and specification, and while Aprilia’s original Tuareg was perhaps an adventure bike in style with not as much potential as some of the others of that period (it was, after all, a single cylinder machine with a lot of plastic bodywork!), the new model will have to be capable of off-road duties as well as on the daily commute or Sunday morning café run. So, with that in mind, I jetted off to Sardinia for a play on the new machine.

Having ridden the 660 RS and Tuono and knowing what an awesome little powerplant the 660cc parallel twin motor is – I was maybe a little sceptical as to how it would translate into an adventure/off-road kind of chassis, given its feisty performance in a road bike chassis.

But, naturally, the engine has been retuned for the off-road focus, with an actual increase in torque (3ft-lb more than the RS, two more than the Tuono), albeit at the cost of a reduction in peak power from the RS’s 98bhp down to 80bhp, with the aim being to make the twin a little less rev-happy, and more flexible for off-road and touring shenanigans.

The frame itself is a tubular steel affair, as is the subframe (both built to be capable of carrying a lot of luggage – and the 210kg that Aprilia specify is A Lot of luggage! That’s two-and-a-third Daves!), although rather than the steel frame carrying the engine mounting points, the upper engine mounts are incorporated by the means of aluminium engine plates, allowing the rigidity of the frame to be tweaked ideally for the mix of road and dirt riding the bike is intended for.

To give the chassis the poise and ground clearance that any bike with off-road aspirations needs, a long set of fully adjustable Kayaba forks sit at the front, with an aluminium swinging arm supported by a Kayaba shock (again fully adjustable) sits at the rear, both delivering a full 240mm of travel.

While it’s easy to plant my size nines firmly on the floor thanks to the skinny, narrow seat, good weather protection is provided not only by the screen but also by the expansive fuel tank, as we discovered in the torrential rain that accompanied our launch ride.

The ergonomics don’t really bring any comments, which suggests that the peg and bar positioning are nigh on perfect, although one’s attention is brought to the fairly obstreperous gearchange.

Shifting gears at low revs felt rather clunky, although the gears most certainly shifted into place, and there were no missed shifts and the quickshifter did aid shifting, especially when the engine was being buzzed through the revs. That’s a very pleasing thing to do given the roar from the airbox and gaping 48mm throttle bodies from 5,500 revs upwards, with sweet shifting as you’re gassing it hard. The exhaust also gives a rumbling popping when clicking down through the box, too. Very sporty.

The brakes aren’t aggressive, but certainly very competent while actually feeling a little soft. That’s not a complaint, just an observation that the front end doesn’t dive or the brakes grab, especially if you’re only using one or two fingers on the brake.

The engine in the Tuareg is, essentially, the same as the powerplant in the RS and Tuono, which is basically the front two cylinders of the Aprilia V4 1100 engine. As you’d expect, it has, however, been tweaked for its new use, with not only new cams with new timing and lower lift, but also increased length on the inlet trumpets, a different airbox, and different exhaust header pipes, all of which are implemented to improve the bike’s driveability with some increased torque and reduced power. It works, too.

There’re further tweaks to the 57kg engine, with the sump being reduced in height for increased ground clearance, and an increased width to retain the same oil volume, and improved oiling (including using the gearbox as a secondary pump) to ensure that oil is moved around the engine at all times, including when riding at angles of up to 35° uphill and an impressive 45° downhill.

A further nod to off-road use has been made with a lower first gear ratio, as well as altering the final drive to a 15-tooth drive sprocket and a 42-tooth rear wheel sprocket.

Not that you’d really notice those changes if you’ve ridden previous iterations of the 660, as it still delivers the same exciting and impressive performance for a midrange machine, with something of an improved flexibility that can pull gears from a little lower in the rev range, which was most noticeable to me when we went off-road. It was very responsive and confidence-inspiring when we hit the dirt tracks of Sardinia – both in terms of power delivery and chassis feedback – even for a virtual dirt novice such as myself.

Especially with the off-road mode, allowing a locked rear wheel to help turn, and spinning the rear up which for me, was used for fun rather than to get the bike turned in the corners. That’s for heroes (i.e. those with more talent than I). It has enough punch to haul up the steepest of gravel fire roads, yet doesn’t have the inherent issues that a larger adventure bike would have in terms of bulk and momentum.

It’s far easier to turn and flick about than something like a 1250GS or even an Africa Twin, and if you ever so happened to be in the position that you had to turn around in a tight spot or, heaven forbid, that you had to pick it up after a tumble, the Aprilia would be a much better option than a 1290 SuperAdventure or Multistrada…

The 80bhp that the 660cc parallel twin engine produces might not give the outright punch that larger adventure bikes have, but it’s still an impressive road bike, to the point that I’d suggest that, in the real world, it’ll be quicker on most roads than the RS or Tuono 660!

Changing direction is slower than with the road-focussed models, but that’s countered by the higher riding position that gives greater visibility, and the ability to soak up lumps and bumps on tarmac that isn’t the most billiard-table smooth.

I’m not sure how comfy that skinny seat would be if you had a lot of motorway miles in mind, although there is a ‘comfort’ seat in the accessories catalogue, alongside numerous other goodies (including the quickshifter fitted to the test bikes).

While the various rider modes that are available don’t actually change the outright power, they do change how that power is delivered as well as changing other parameters that are ideal for an adventure bike. Refreshingly, these can be easily scrolled through via the button on the right-hand bar, with the mode being sent when the throttle is closed.

I found toggling between Urban and Offroad perfect for the mixed riding that we did, while the more radical Explore would’ve been better for road riding had we not been riding on wet roads. The final, Individual, mode allows for personal settings to be made to tailor the bike’s attributes to your own desires, although I didn’t have time to explore this avenue.

Those modes – lumped under the title of APRC, Aprilia PerformanceRide Control – include variables with the traction control, cruise control, engine braking and engine mapping, while the anti-lock braking is switched off for the rear wheel in Offroad and the front anti-lock can also be turned off if required.

The 5-inch TFT full-colour screen displays all that is going on with the Tuareg, and you can also connect your smartphone to the bike with the Aprilia MIA, which allows you to control phone calls and music via the handlebar buttons. Phone connection also means that your satnav can be displayed on the screen.

The app also allows you to save completed trips and then analyse the data acquired in the app using the telemetry function. Neat! Looks don’t deceive It could be that the new Tuareg is the perfect replacement for the original, in that it is not only better at fulfilling the role for which it has been prepared, but that it retains the Aprilia DNA in the looks and performance.

It’s capable on and off-road, has touring aspirations with the load ability and the range of factory luggage and accessories, and is well-priced given the spec and tech.

The Acid Gold, Martian Red versions of the Tuareg chime in at a competitive £10,600 with the Indaco Tagelmust (and before you ask, no, we have no idea what that really means, although it is inspired by the original colour scheme of the 88 model) livery costing an extra £500, while there will also be an expansive range of factory accessories and clothing to suit.

All that remains is to try it out in conjunction with its direct competitors. Are you ready, Ténéré, X Cape, Tiger and GS? You need to be…