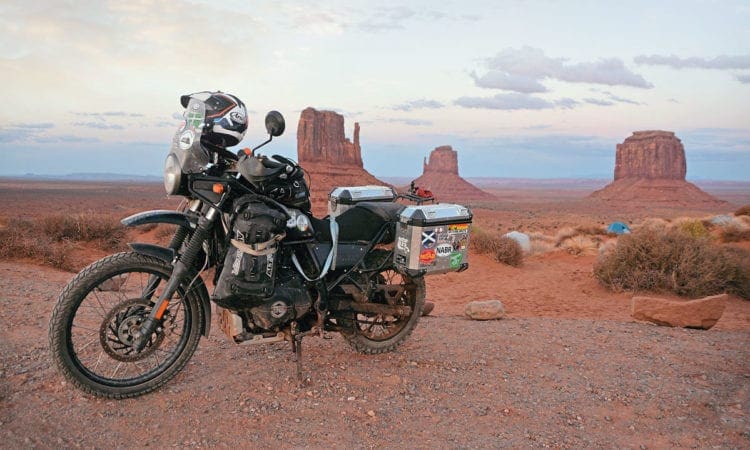 16,000 miles on the Himalayan reveals a classic overland travel bike.

Expectations are seldom met, let alone exceeded. That personally rings true of the adventure market where arguably we’ve reached a point of stagnation. Manufacturers are throwing more power and gadgets at the bikes, but they’re not really becoming any more useful for the act of travel.

They’re also becoming ever more expensive and if you’re softening that blow through PCP then the fear of getting out and using the thing is increasing. Mileage and damage are more detrimental than ever, which is hardly conducive to free-spirited adventure.

It’s why the Royal Enfield Himalayan intrigued me, especially when confirmed to have a price tag of just £3999. It seemed too good to be true. A versatile small capacity bike, not lacking in basic appeal, yet undercutting the other small capacity adventure machines by at least £600 (Honda CRF250L and Suzuki V-Strom 250), and as much as £1200 in some cases (Kawasaki Versys-X 300, BMW G310GS). Equally, you could have four for the price of a well specced R1200GS, or, buy a Himalayan and use the rest to take it around the world.

Certainly, it didn’t have the best of reputations after its launch in India two years ago, suffering a ream of issues that caused the manufacturer to halt the production line and to correct a reported 36 faults. That gave birth to the BS4 model (up from the BS3) and with it came EFI and ABS for the export markets. So, intrigued by the bike I bought one, one of the first in the country and sat patiently waiting to ride it whilst a broken ankle healed.

Spring came and so began the riding. Almost 16,000 miles later, 6000 of those on a coast-to-coast trip across America, and the verdict may or may not surprise you.

Read the FULL feature in the November issue of Motorcycle Sport & Leisure – on sale October 4.