Can you improve your road riding on track? California Superbike School says you can! 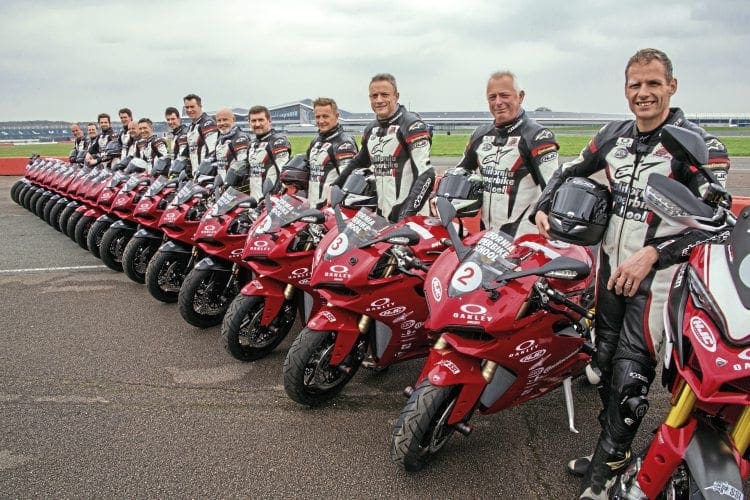 Founded by the legendary Keith Code in 1980, the California Superbike School offers a step-by-step method of technique-oriented rider training in the art of cornering motorcycles. The four California Superbike School training levels are completed in order, with each of the first three levels presenting precise technical riding skills, taught the old fashioned way – one step at a time. Each skill builds upon the last to create a complete package of control and confidence.

Training takes place at various circuits around the world, including several iconic locations in the UK.

For more information about the California Superbike School, visit: www.superbikeschool.co.uk

The California Superbike School runs track-based rider training from Level 1 to Level 4 (a full day of training each), and even if you’re Rossi you have to complete them in order, as each level is tailored to tackle different elements of riding rather than being based on skills. Training is available around the world, including several UK locations. I did Level 1 at the Silverstone Stowe circuit on a Kawasaki Ninja 300, followed by levels 2 and 3 on a Ninja 650 at the same venue.

The training days start at 7am with registration, as well as bike and kit checks. The guys at the school run a tight ship when it comes to safety, so your bike and all your riding gear need to be checked before you’re allowed on track to make sure there’s no risk to you or any other participant.

It’s great to see that they take rider safety seriously; the last thing you want when you’re concentrating on improving your riding is someone’s bike falling to pieces in front of you. 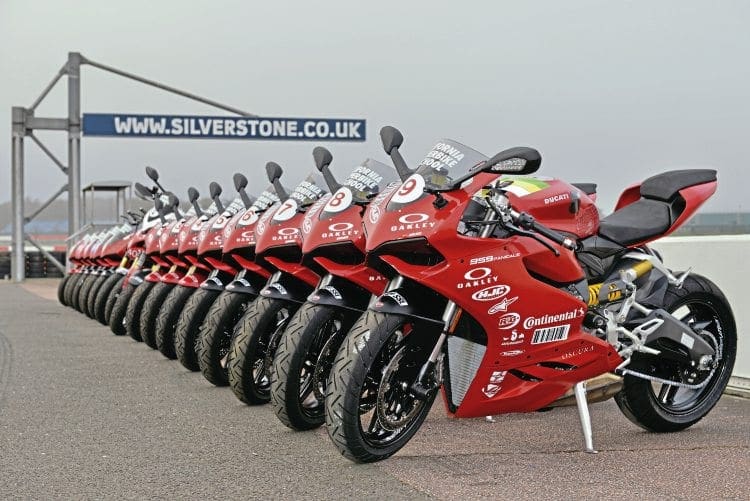 As the training is done on normal road bikes, there are a couple of things that need to be done to them before the training. The mirrors and speedo are taped over, so you’re not distracted by your speed or by what’s going on behind you. You are also advised to drop the pressure in your tyres a bit for better track performance (the staff at the school will advise on the best pressures to use).

My expectation from the training was that it would be very much based on racing and skills limited to track use, which was slightly daunting considering that I’m not much of a track rider. Luckily, it soon became clear that the skills that you learn at the school are as effective on roads as they are on track.

The beauty of practising on track is that there is no other traffic to worry about. There are no lorries pulling out in front of you, no oncoming vehicles and no pedestrians. It’s a great environment to simply focus on the job at hand.

Each day at the California Superbike School starts with a classroom session that explains the track etiquette, including the different flags and signals. Then follows more about what the day is all about.

Level 1 is all about increasing your confidence and skills in cornering, while keeping the bike stable. To achieve this, we had five classroom sessions and five track sessions. Each step adds elements to your riding that improve the stability of the bike. So it isn’t really about getting the fastest lap or scraping your knee, it is about getting the basics right, which then makes for faster and safer cornering.

The first drill is all about throttle control. Applying smooth and consistent throttle at the right time is essential for the suspension to compress just enough for it to be in the optimal working range. To test the theory we headed out to the track with instructions to use only one gear and no brakes. The track coaches rode in front of us and demonstrated with hand signals when to close and open the throttle. This was hugely helpful and made cornering a lot easier without much effort.

After each track session we had a quick debrief with the coach, which was super-helpful, as you still had all the highs and lows of the last session fresh in your mind.

The day continued with further lessons and track sessions that covered turn points (apparently I, like many other riders, turn far too early), turning quickly (counter-steering was explained in a way that finally made sense for me) rider inputs (basically, not upsetting the bike’s inherent balance) and two-step turning (lifting your eyes from the turning point to the apex and beyond). The final debrief was a bit of a recap of everything that we had learnt during the day and suggestions of how we could improve our riding further.

It was great to have a dedicated track coach, who could give you instant feedback before you forgot what had happened on the track. Knowing that you would be asked questions about your riding also meant that you had to think about it while out on the track, which also made you focus on the drills rather than just treating it as a trackday.

While Level 1 concentrates on machine control, Level 2 is all about visual skills: how to avoid target fixation, choosing the right reference points to guide your ride, and benefiting from your peripheral vision. These are not novel concepts (they are covered at most track riding schools), but the way the theory is presented and then put into practice makes a difference.

Take this for example:

“Does anyone find it easier to ride fast and smoothly when you are following another rider?”

I had never really thought about it, but yes, I did find it easier to pick the right lines, adjust my speed correctly and choose my turning points more accurately when I was following another rider.

I wasn’t sure. Was it imitation? Or perhaps confidence from witnessing that the speed of the guy in front was suitable for the situation? It wasn’t. “It’s because you lift your vision and look further when you have a big target like that in front of you. As you’re not concentrating on what’s right in front of your bike, you see everything earlier and have more time to deal with it all. This makes it seem easy”

Gotcha! This was the real nugget of gold for me. It’s not rocket science that looking further ahead helps give you more time to deal with anything in front of you, but nobody had ever explained it to me in those words.

But hang on, this means that I have it in me to ride a lot faster and smoother than I normally do, as long as I don’t make a hash of it by staring at the front tyre of my bike. It was something of a bittersweet realisation that it was only me holding myself back from progressing. But there is a cure for this: practice!

The first two levels had been mentally tough with all the concentration, but Level 3 brought with it physical challenges too. This time we were starting to move on the bike (while still keeping it stable, of course), and that proved to be hard work.

The exercises for Level 3 include hook turns, power steering, knee to knee, hip flick and attack angles. Apart from the last one they all involve moving your body to an optimal, if not particularly comfortable, position on the bike. I found the hook turns particularly useful: moving your bodyweight to the inside and front of the bike loads the front suspension more, making the bike turn tighter. It’s a great tool if you feel like you are drifting slightly wide in a corner.

The knee to knee drill was another favourite, giving us students a great technique in keeping our bodies firmly locked to the bike when shifting bodyweight from side to side in chicanes. Quite wisely, the last drill of the day no longer required moving about on the bike (we were all pretty knackered by this point). Instead, the attack angles exercise provides tools for negotiating bends by altering your entry angle ¬simple but effective!

As much fun as I’d had over the day, I was ready to call it a day when the last session was over. It’s a lot of hard work, but well worth it.

I can’t believe how much the coaches at the California Superbike School improved my riding in just three days. My riding became a lot more controlled, effective and faster than it was before. And most importantly, I felt like I was riding a bike that remained stable and predictable though the corners, even when I increased the speed.

The way the school is run is quite remarkable. There are track and classroom coaches, people making sure that everyone is in the right place, mechanics to look after the bikes, a photographer and videographer capturing your progress on film, so you can see for yourself how you have improved, and a whole host of people running the show from the wings. For us learners it all translates into a great learning environment, where you don’t have to worry about anything other than improving your riding. The atmosphere is fun, relaxed and welcoming. There is not a trace of the egos that are sometimes associated with track riding. 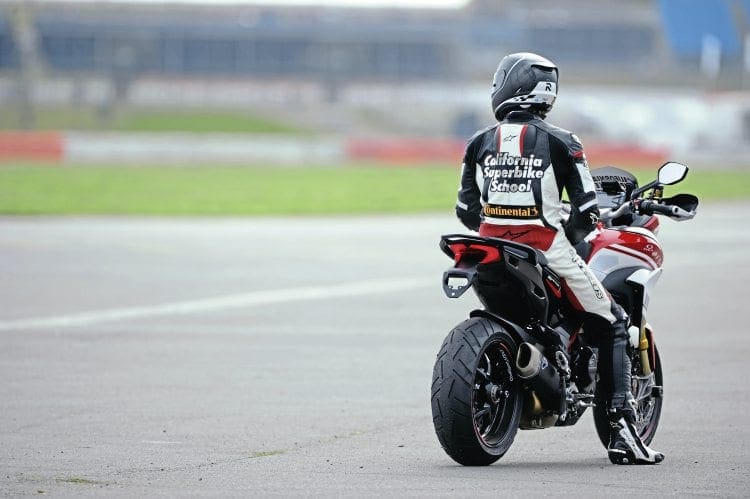 If you are lacking confidence in cornering, a day with these guys might be just the thing for you. The prices for a single day of training (excluding kit and bike hire) at Level 1 start at £425, so it’s not a cheap day out, but the results are real and impressive.