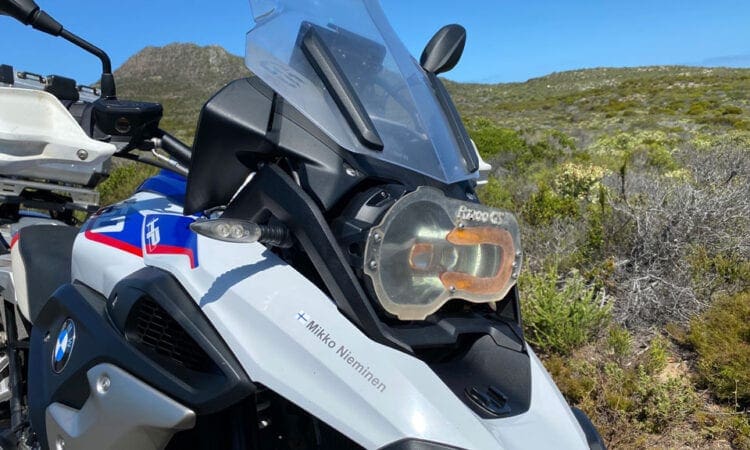 When I booked myself on the Motorrad Tours South African Garden Route tour, I had my mind buzzing with thoughts of lions, elephants and miles of exciting roads to ride. And not much else. Things like geography, climate and culture seemed like minor details – something to be looked into later.

As usual, that elusive ‘later’ never materialised and the departure day drew closer and closer without me having done any prep at all. It was blatantly obvious that apart from my hazy memories of grim Apartheid news decades ago, I didn’t really know anything about the country I was about to visit.

So, I did what you do in the absence of a guide book – I googled it. The first page that came up was the UK government’s travel advice. It started well: “Over 430,000 British tourists visit South Africa each year. Most visits are trouble-free.”

Oh well… I reminded myself that no South African I have ever met has been a baddie. Some seemed overly keen on strange dried meats and rugby, but otherwise they seemed ok. And my friend Lynn is South African, and she is one of the sweetest people ever to walk this earth, so on balance, they must be ok as a nation. Decided!

After a bit more web surfing (do people still call it that?) I established the basics, but before I could work out why they had three capital cities and how that worked, it was time to fly to Cape Town. So I did.

Landing in Cape Town soon put an end to any doubts I had about the country. Even with all the history of oppression and violence, and the dramatic chasm between the kind of lives led by the ‘haves’ and ‘have nots’, there didn’t seem to be any sign of trouble.

The rest of the tour group were already in town when I arrived. Five riders, three pillions, a tour leader, and a local fixer with a support vehicle. They didn’t seem like trouble either.

Before getting anywhere near the motorcycles, we started the official programme with a city tour. What we saw was charming. The harbour is a thriving maze of shops and restaurants, street performers and revellers. Table Mountain is a natural wonder offering fantastic views over the city (provided you don’t get there on a cloudy day like we did!). And the townships are full of life with determination, entrepreneurial spirit and an unshakable belief that life can be improved. It’s easy to fall for the place.

But Cape Town was was just stage one of our trip around the Garden Route, and the grass was growing under our feet.

Picking up bikes for a tour is always exciting. We collected ours from a depot just outside the city centre, inspected them, stuffed our bags in the panniers and off we went. It’s as simple in South Africa as it is anywhere else.

As this was a Motorrad Tour operation you can appreciate that all the bikes were BMWs. And you may also have guessed that they were all GSs – four big 1250s and one 750. Mine was an R1250 Rally TE, with all the bells and whistles (including electronic suspension), aluminium panniers and a top box.

The first few miles were cautious as we were all getting used to the bikes, bedding in their new tyres and calibrating our brains to South African traffic – at least they ride on the left so that was one less thing to adjust to.

Soon after we left Cape Town behind, I felt very at home – not because of my surroundings or the bikes, but because it started to rain. It was just a bit of drizzle, but enough to increase your level of respect for a strange bike on new rubber, on unfamiliar roads. The first few miles were steady.

As we wound our way towards the coast the initial feeling was that of nerves. It was great to be on the bikes, but I think that everyone felt a little timid. After a quick stop at Constantia vineyard (the first vineyard I have been to with signs warning you not to feed the baboons), we reached the coast at Kalk Bay and followed the shoreline down towards the Cape of Good Hope.

About half way down the peninsula the rain had moved to pastures new, and we stopped at a penguin colony in Simon’s Town. There are several offshore colonies of African penguins along the coast, but the one on the beach in Simon’s Town is easy to access, and as you can imagine, it was busy. It was great to get right up close to the little creatures though, and a little break from riding was welcome.

From there the road opened up a bit, but the traffic was fairly dense all the way, so the going was fairly steady.

To reach the most south-westerly point of the African continent, we entered the Cape Point National Park, and carried on to the tip of the land. You can climb up to the old lighthouse and get your photo taken behind the Cape of Good Hope sign, but for me the more exciting thing was that you could also see baboons and ostriches wondering around the park. It’s a strange feeling having to scan the roadsides for baboons that might run in front of you.

Heading back up to Cape Town we passed through Scarborough and Llandudno. They were both almost entirely unlike their namesakes back in the UK. Between the two copycat towns was Chapman’s Peak Drive – a gently winding coastal route with a sheer drop into the ocean on one side and a rock face on the other. A lovely bit of road on a motorcycle, but busy with slow moving cars.

The first day of riding was a great shakedown to give us a chance to get used to the bikes, local traffic, riding together, and generally reacquaint ourselves with riding in decent weather when back home it was all stormy, cold and wet. But if I’m honest the trip would probably have been equally (or more) enjoyable in a car, given that we had little opportunity to escape the procession of slow moving traffic.

However, it was great to have that first taste of riding in South Africa, and it really made me look forward to the next day of riding that would take us out of the city and onto less congested country roads.