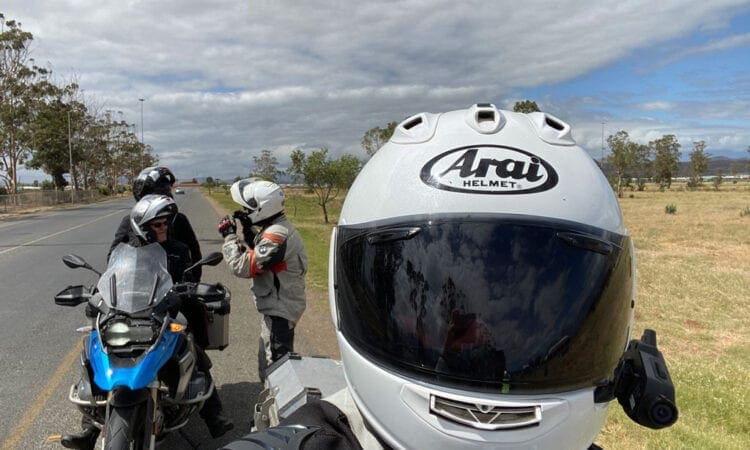 The last day of riding in South Africa. How did we get here so quick? It seemed that we’d only just started, but at the same time we’d covered a whole heap of things in the two weeks we’d been on the road.

From the hustle and bustle of Cape Town to the tranquillity and calm of the Mount Camdeboo Game Reserve, and everything in between, it’s been a tour packed full of not only riding but experiencing life in South Africa too. But it wasn’t not quite over yet.

We left our digs at the vineyard slightly reluctantly. It wasn’t easy to tear yourself away from all that lovely wine or the scenery of vines reaching all the way to the mountains on the horizon. But the mountains were where we were heading, so it wasn’t all bad.

The last day’s riding was hardly the most direct route back to Cape Town. It was a loop over the mountains, taking in some lovely passes and old towns, before eventually joining the highways that feed the big city.

Riding around the mountain passes was a good chance to reflect on the trip, the bike, and how it had all panned out. I had come to South Africa with very little knowledge or expectations of the place, but even so, I was surprised by so many things.

On the positive side were the incredible flora and fauna, which are about as far away from what I’m used to back home as possible – it’s incredibly rare that a baboon runs across the road in front of me when I’m riding to the office. I was also pleasantly surprised by the roads (both in terms of condition and entertainment factor) and the road users.

During the two weeks I only saw one driver lose his cool, and that was in Cape Town so we can maybe just put it down to city mentality. Otherwise, the car and lorry drivers were courteous and considerate towards bikers. The curious thing is that there really aren’t that many bikes around. You’d think that the climate would make it a more appealing form of transport, but that doesn’t seem to be the case.

The only part of life in South Africa that grated with me was the colossal gap between the rich and the poor. There were shanty towns near all urban areas, and the quality of living for people there was dire. At the same time you could see luxury cars negotiating the streets. I know it’s the case in many places around the world, but it makes you appreciate what you’ve got.

The bike on the other hand was almost entirely a positive experience. I had ridden the BMW R1250 GS before, so I knew what to expect, but cruising round those last passes I was once again reminded how good the bike really is. The electronic suspension made cornering so solid and confidence-inspiring, and the engine pulled so keenly when you shot out of the corners that you just couldn’t help smiling. Add to that the quickshifter and cruise control, and even the more boring stretches of road were a breeze.

The TFT screen and the built-in connectivity also meant that I could link my phone and headset to the bike, then control everything from the switchgear – some of the days were long, so my playlists went round quite a few times. The only things that I wasn’t entirely happy with were the screen and seat. In fairness, I still haven’t found a screen that I am entirely happy with, but the one on the GS seemed a little low to me (even when in the top position) and quite noisy.

The seat could have been slightly higher, not because I wanted to be further from the ground, but because the distance from the pegs to the seat was not too long and after a few hours on the bike I spent a good amount of time riding standing up and stretching my legs. Neither issue was a major one, and with shorter distances they wouldn’t even have been a consideration, but on a big tour like this little things get to you in the end.

In terms of the tour itself, I thought that Motorrad Tours and their local partner Up South Adventures had done very well. There was a lot of riding (almost 3000km in total), lots of things to do besides riding (from the Cape Town tour to a game drive), and everything ran smoothly.

I particularly liked that there was the option to follow the tour leader, or go and do your own thing using the satnav and route notes. That gave everyone a chance to ride at their own pace, stop when they wanted, and not be chaperoned too much. Our group was a good one though, and on the one day when I did my own thing I missed the company of the others when I stopped for a drink or lunch. Having the other riders around and sharing the experience made it even better for me.

Tours like this cost a lot of money, there are no two ways about it. But you get value for money with expert guidance, having activities and logistics organised for you, high-quality meals and accommodation and just generally being looked after really well. If you have the money, it’s a no-brainer – definitely worth it! Just a word of warning: the food in South Africa is good and the portions generous, so if you’re not careful you will return home fat. Not stout. Fat! Still, that’s a small price to pay for all the fun you can have.