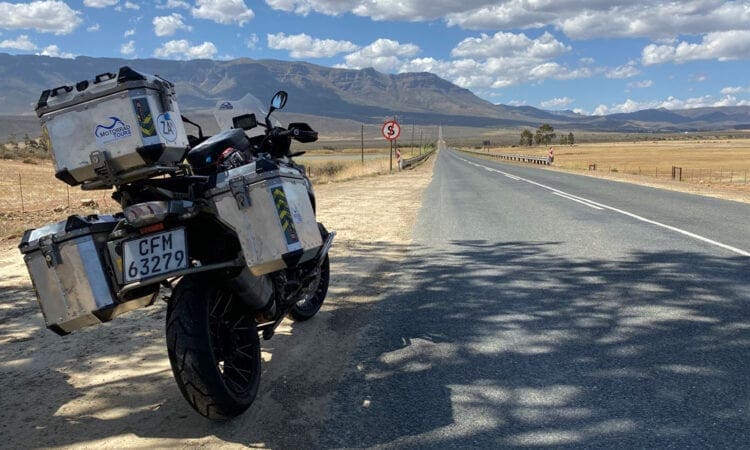 The second day started with us negotiating our way out of Cape Town, following the coast north to a nice viewpoint in Bloubergstrand just outside the city where you got a nice view of Table Mountain – and today there was no cloud restricting the view. You could also see Robben Island, where Nelson Mandela spent 18 of his 27 years in prison.

From Bloubergstrand we turned inland, heading east. As soon as we did that, the scenery changed. Gone was the lush greenery of the coast, and instead, we faced brown and dry flatlands, with the Hex River Mountains on the horizon.

It was nice to be on faster roads after the city and the busy roads to the Cape of Good Hope. Now we were able to get some miles under our belts as the wide and fairly empty roads stretched in front of us. It was great to be able to keep the pace brisk as the temperature had shot up to +34°C. Even if the breeze felt like someone pointing a hairdryer at you, it was still better than being still in all your bike kit.

It was a joy to let the bikes stretch their legs too. On the faster roads, the GS reminded me just why I had enjoyed riding it in the past. The light steering, agile chassis, sublime balance and millimetre-perfect riding geometry combined with a peppy engine and more electronics than I knew what to do with make it a fantastic bike on any roads – or offroad as we would find out in a couple of days.

As we got nearer to the mountains the barren landscape slowly turned more verdant, with vineyards and farms dotted here and there. The red stones along the road added to the palate, and the shades of red, gold and green were constantly changing. I wondered if these colours were the inspiration behind the many colourful flags that African countries have.

The choice of GSs for this tour is no coincidence or a PR trick from the BMW-sponsored travel company. They are robust, comfortable and easy to ride, there is a good network of support in South Africa, and they have big tanks to help you cover the long distances. But even with those sizeable tanks we still needed to stop once or twice a day for fuel given the distances travelled and the sometimes sporadic locations of petrol stations.

Today was the first time we filled up. Or rather, we had the bikes filled up for us. At petrol stations, you are directed to a pump by a forecourt usher, then you have your bike fuelled by a pump attendant, and all there is left for you to do is to pay and give the guys a token tip. It makes the whole process easier, and it’s very much in line with similar jobs that aren’t strictly speaking necessary, but make life easier and offer employment to unskilled workers.

The same applies to parking attendants (not just those checking for payment, but those pointing you to free spots and guarding your vehicle while you’re away), hotel porters (who carry your bags to your room even if it’s close enough to throw the bags there) and roadworks crews (waving red flags at the side of the road to warn you of roadworks ahead, which may or may not exist).

Anyway, with the bikes fuelled, it was time for us to fill up. The location for our lunch stop was very fitting for the area – a vineyard. South African wine is world-renowned, but riding around here under the burning sun it’s difficult to understand how anything can grow in such a hot climate. Still, vineyards seem to be flourishing, and the wine is certainly tasty.

Soon after lunch we rode through Ceres, named after the Roman goddess of agriculture because the valley in which the town is situated is highly fertile and a major producer of fruit.

The highlight of the day was the nadgery Bainskloof Pass. It’s not tight and technical like the Stelvio or other chest-beating macho-passes in the Alps, but because it’s easier to ride it’s also more enjoyable – you can actually enjoy the ride and the scenery, without having to concentrate on every inch travelled. The tarmac is a bit bumpy in places, so attacking the corners with a Rossi-like enthusiasm is likely to end in tears.

Having cleared the pass we were in the lowlands again. It seems that in this area, most of the land is fairly flat, with ribbons of mountains dissecting the plains every now and again – there’s very little in between, it’s either very flat or distinctly mountainous.

Another hour was spent in the flatlands, overtaking massive lorries tugging away on the long straight roads until we came to the Rooihoogte and Burgers passes. This time the corners were more gentle, the tarmac in better condition and the roads bigger, so we had a nice fast slalom through the bends and into Montagu where we spent our first night on the road.