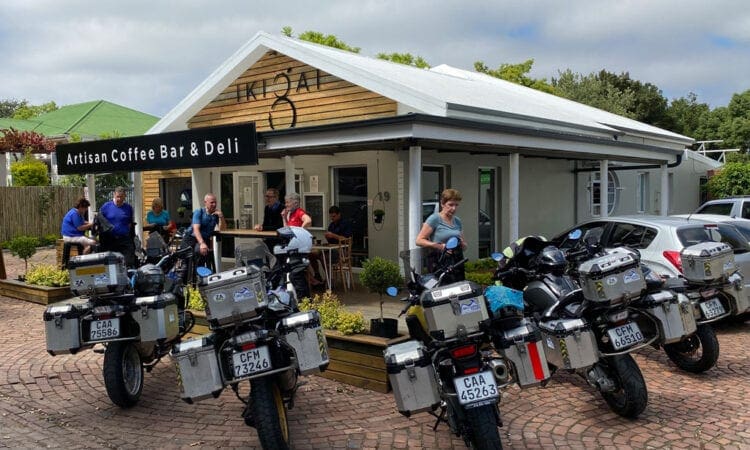 I thought that the second day of riding had been hot, with temperatures climbing to 34°C. But as I was staring at my bike’s dash in disbelief, blinking furiously to try and keep the sweat from running into my eyes, I was faced with a reading of 39°C. Suddenly yesterday seemed rather cool.

We had started the day from Montagu, and in a strange sort of reversal of the previous day, the lush scenery of farms, flowers and palm trees gradually turned into the baking oven that was the Little Karoo.

Our first coffee stop of the day was in Swellendam, a lovely old town with a fabulous blindingly white church and a host of cafes, offering everything from regular black coffees to rooibos lattes. At this point the temperatures were still quite reasonable, but that was about to change as we crossed the Tradouws Pass into the Little Karoo, the ante-room of the semi-desert that is the Karoo, and the temperature sky-rocketed.

Before the real heatwave hit us we stopped for lunch in a place called Diesel & Crème, decorated in the best American Route 66 style with old petrol pumps, knackered cars and bikes and the usual roadhouse regalia.

Seeing the rusty old bikes on their yard made me grateful that we were on the dependable GSs, and not only that but with a support vehicle following us. If anything went wrong, someone would be able to sort it out and you could get a lift away from the sweltering desert in a nicely air-conditioned van. Just the thought of air-conditioned space was almost enough to kick the bike over and cry for help…

I had realised that it would be hot on this trip, so I had armed myself with an RST Adventure X jacket and trousers, with ample ventilation. They are great items and the vents are fantastic when the temperature was still below 30°C, but as the mercury climbed up to the high 30s it became obvious that it doesn’t matter how well ventilated your kit is – it’s just too hot to ride in that heat. All you can do is pour water in your mouth and on your head at every opportunity, wet your necktube for a little extra cooling factor and try to not concentrate on it being exceedingly hot.

Perfect to take your mind off the weather was our next stop, Ronnie’s Sex Shop. Despite the name, this is not actually a sex shop, but a bar and general store, with an enticing name, quite possibly something that Ronnie thought would bring more folk to his place in the middle of nowhere. And it worked. Judging by the sheer amount of signatures on the toilet and bar walls, the bras hanging from the ceiling and the stickers plastered on the doors, this is a place well on the tourist map.

After we’d had our fix of Ronnie’s refreshments it was time to hit the road again. Talking about the road, we were now on Route 62, the old route from Cape Town to Port Elizabeth before the bigger and faster N2 highway was built. It’s an iconic road, drawing many road-trippers, and it’s a key part of the Garden Route.

And since I am jumping from one topic to another with gay abandon, let’s talk about the Garden Route. I hate to admit this, but before I signed up for the tour I didn’t even know that the Garden Route was a thing. But it appears to be one of the top road trips in the world, commanding a section of the Indian Ocean coastline bridging the provinces of Western Cape and Eastern Cape, and bordered by the Outeniqua and Tsitsikamma Mountains.

The area is famous for its ecological diversity and mild weather, and there’s even a Garden Route National Park. For me though, the biggest draws from the beginning were the coastal riding, mountain passes, warm weather during our northern winter and the chance to see some fantastic exotic animals along the way. And so far all of that had come true on the tour. And this was only Day 3. We were only getting started really!

This was the first night when we experienced ‘load shedding’ on the tour. That’s basically when there is a shortage of electricity and the supply in different sections of the country is shut down for two hours at a time. At 8pm it was our region that had the big switch flicked off. We had almost finished our dinner when the lights went out, gas lights came out, and the waiter shrugged and said “T.I.A., This Is Africa.”