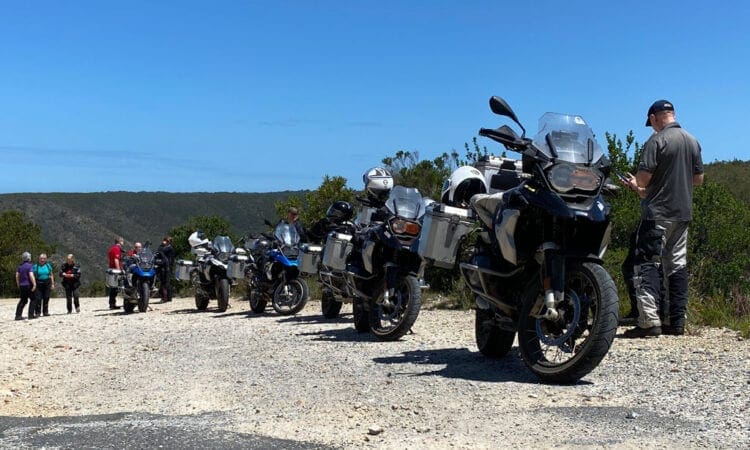 After two nights in Oudtshoorn, we were on the move again. And today’s ride was a long one – 455km of country lanes to Addo, near Port Elizabeth. There is a highway that would have got us to our destination, the home of South Africa’s National Elephant Park, much faster but where’s the fun in riding on highways?

Christine’s 750GS was still at the garage and once the new shock had been fitted it would follow us in the support vehicle, so she was riding pillion today, but other than that our group was out in full force again.

The first bit of our route took us over the Outeniqua Mountains. The road was covered in tarmac as smooth as silk, and with it being a fairly large road, the temptation to ignore the speed limits was strong.

Luckily the views were so good that you were quite happy to trade a bit of speed for a chance to have a good look around and admire the mountainside turning greener as we crossed to the coastal side and entered the more lush surroundings of the coastal area, including the Garden Route National Park.

As we reached George, a large(ish) town on our way to the coast, I suddenly realised how much the South African towns reminded me of America. From the road signs and traffic lights to shop fronts and houses, it all seemed almost but not quite American. Seeing a couple of Harleys cruising the streets of George only added to the illusion.

Talking of towns, I like the names given to these places. One of my favourites was Wilderness. Doesn’t that sound exciting! In my head there were visions of crazed old men with bushy beards huddling around a campfire, telling stories that would make your blood curdle. Well, that image could not have been further from the truth.

As we reached Wilderness it became clear that it was precisely the opposite of what the name would suggest. It was about as wild as Malibu or Biarritz. However, the beach looked stunning, the bars tempting and the carefree vibe made me want to stay. But no, I’d have to wait a few days until we would spend a night here on our way back to Cape Town.

Even though we steered clear of the highways, covering long distances means a lot of main roads. The combination of long straight roads, warm climate, and a super-smooth bike is a cocktail that sends you into an almost a trance-like state, where you are just plodding along, immersed in your own thoughts, wondering if Leonard Cohen was right and there really is a tree in Vienna where doves go to die. Then, suddenly, something like a baboon running across the road in front of you brings you back to reality again.

Bringing a delightful distraction from absent-mindedness and baffling song lyrics, was a little detour to Nature’s Valley along a twisty decline. The sharpness of the bends took some careful negotiating after the fast roads we had spent all morning on. Climbing up from the valley, we took the Bloukrans Pass.

The road is officially closed to direct traffic to the new toll road that has replaced it but it is still passable, although nature has started to claim back the land. Most of the way the road is narrow with vegetation pushing in from both sides and grass coming up through the tarmac. It’s perfect for adventure bikes, lovely to ride, and feels like a calm sanctuary, with the wild trees proving a rare bit of shade. Lovely!

After the pass we were back on more major roads, and the cruise control was well utilised again. It really is a godsend as my shoulders were already feeling the strain of gripping the handlebars for a few days.

Everywhere we have been so far, no matter how seemingly remote our location has been, there are always people by the side of the road. Some are walking to their destination, others hitching a ride. And as is the case everywhere around the world, the children always wave at motorcyclists. What all these people are doing on the road I don’t know, but wherever you go you are never alone.

Cruising along the coastal (or near-coastal) roads, lined by fields and pine forests with the Tsitsikamma Mountains on the horizon, the vista was almost like one you’d find in Scandinavia. If troops of baboons hadn’t run across the road every now and again, you could almost imagine that you were riding the coast of Norway, on the other side of the world. I don’t know, maybe it was just the heat playing with my mind…

Eventually we reached Addo, our home for the next two nights. And not a moment too soon – these long, hot days in the saddle take their toll. Clearly well briefed that a hot and bothered motley crew of bikers was arriving, we were greeted at the car park by a nice man offering us ice-cold beers. It was bliss!