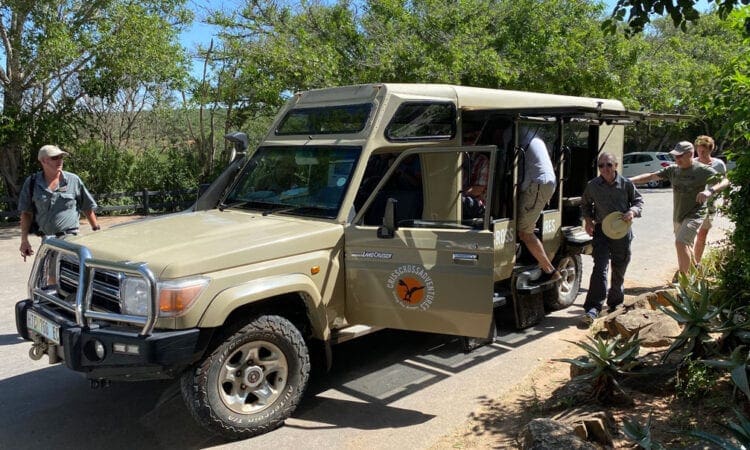 Day six was the first one where we didn’t even touch the bikes. Instead we headed off to a safari in the Addo Elephant National Park.

After a leisurely morning spent relaxing – and quite frankly enjoying not being on a bike for a change – we jumped into a huge safari-style Toyota Land Cruiser and headed for the park.

Our driver/guide Gibson explained that we had a good chance of seeing some of the 600 elephants, but because the park is so large (184,000 acres) there were no guarantees. There were also other animals in the park. Zebras, antelopes, warthogs, buffalos and a number of other creatures might also be observed. This was very exciting!

As we entered the park, we spotted our first animal almost instantly. A large leopard tortoise was crossing the road just in front of us. For a little while I thought that this might be all we’d see, but soon enough we spotted a small herd of kudus and red hartebeests, both antelopes with impressive horns.

A little further on we saw our first elephants – a family of six of these magnificent beasts was trundling along, minding their own business.

With the elephants spotted, I was happy with the result but there was more to come. We came across some zebras who came right up to our vehicle, some warthogs who scuttled around and then disappeared into the bushes, and three old buffalos doing whatever it is that old buffalos get up to.

But there was still more to come. Under a tree, lazing in the shadows were two male lions. This was particularly lucky as there are only seven lions in the whole park.

At first we thought that they were sleeping, but after a few minutes they got on their feet and padded a little closer to us, only to lay down again and have another snooze.

I couldn’t believe our luck. We had spotted all the big animals that were in the park. Brilliant result! Gibson pocketed a handsome tip from our ecstatic group. Next day we would be back on the bikes, and full of beans after such a great ‘off’ day.