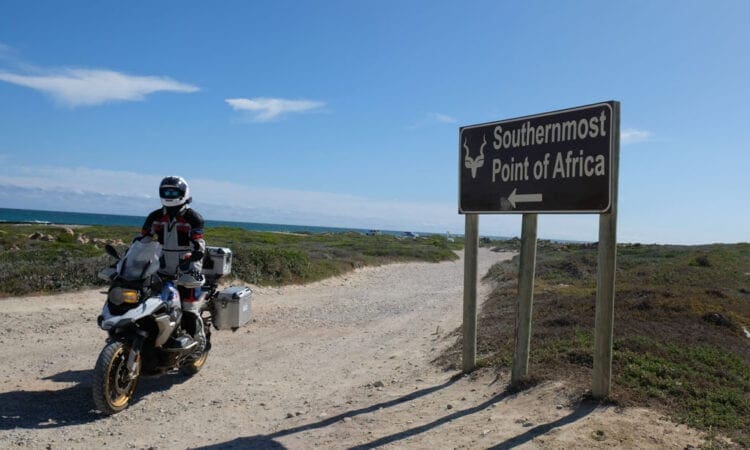 Today was another long slog of 400+km. But the reward at the end was big too: Cape Agulhas, Africa’s southernmost point.

The ride started with the Seven Passes road. It’s a lovely windy road, not very mountainous, so I’m not sure where the passes are, but it took us to George in the most enjoyable fashion. Perfect bit of road to get you going for the day!

In George we hit morning rush-hour traffic, and I realised that this was the first time since we left Cape Town that we had to endure urban levels of traffic. Everywhere else we had just quickly touched town traffic and then disappeared into the country again, or our timing was such that the roads were quiet. But today we spent a good while filtering through town. In a way it was a nice change, but I didn’t miss it as we cleared the city limit.

Given that this was another long day of riding, we had a fairly long section of dual-carriageway to help us cover the distance in good time. Much like riding in George, this seemed like a nice change from the riding we had done on previous days, and it was nice to feel like we were making progress. The amount of traffic was quite little, so we just set our cruise controls and weaved our way through the traffic.

The scenery along the highway was very much what I had imagined the Garden Route to be like: fields and woodlands. A lot of it looked quite dry, but given that the country has just suffered one of the worst droughts in a generation it wasn’t too bad.

Talking about the lack of water, almost everywhere we had been so far had been affected by the drought, and you could see signs encouraging people to save water everywhere. You didn’t need to be an expert to appreciate that the situation was serious. But other than not waste water there was little you could do other than hope that the rains would come.

Because of the long ride, we stopped a couple of times for fuel and I finally got an answer to something that had puzzled me for the whole trip: every time you fill up in South Africa they record your registration number. I had no problem with it, but I couldn’t think why they needed that information.

Well, apparently this was to stop people claiming that they hadn’t been to the petrol station and had been mischarged. It’s more of an issue with fuel cards, but they recorded everyone’s details all the same. Now I know.

After the highway, we took a fast A-road towards the South and Cape Agulhas. As with so many times previously, overtaking was made easy by slower vehicles moving over to the wide hard shoulder as they saw a group of bikes in their mirrors. Many drivers also waved at you as you passed. It seems that generally motorists in South Africa are very tolerant towards motorcyclists. I wish that was the case everywhere.

After our long ride we reached Cape Agulhas, and parked our bikes on the rocky visitors’ car park. At the car park, I spotted a couple of Harleys and a GS with some kind of charity signs on them. I had a chat with the riders and it turns out that they were doing a charity run for children’s care by visiting the most southern, western, northern and eastern points of the country. Good on them! I gave them a small donation and wished them well – they had their work cut out, hauling those big Harleys across the country!

I’m ashamed to admit this, but I hadn’t realised that Cape Agulhas was where the Atlantic turned into the Indian Ocean – I always thought that was at the Cape of Good Hope. Everyday a school day!

We finished our day with another dirt road section to nearby Arniston, a small town by the sea. A perfect place to unwind after a long day riding.