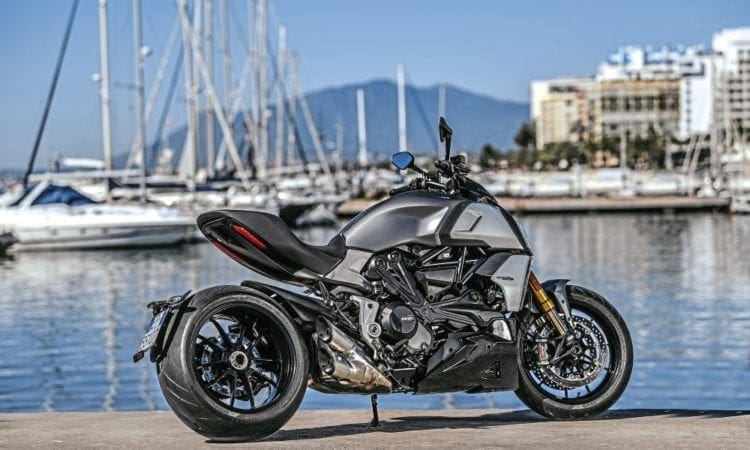 When was the last time you rode a bike that was largely alone in a sector that it itself created? A bike that is instantly recognisable. That made a load of power and delivered in a chassis that was…

OK look, enough of this. Let’s talk about the new Ducati Diavel 1260. Actually, the 1260 S. It’s the one we’ve been enjoying on the world launch in Spain. It’s incredible.

And I don’t mean that in a ‘gosh, look at this lovely new motorcycle in the sun, isn’t it spiffing’ kind of way – I’m talking about a bike that I want underneath me all the time. It’s incredible. It’s spot on. It’s a beast, it’s fun, it’s easy to use and potently rampant on the road and I say this with true conviction after just 175 miles or so on the road.

All new, yet recognisable

The reason it works is because of the overall changes that Ducati has made to the Diavel – the geometric changes are huge (although, happily the riding position is virtually identical to the original bike’s design).

What the Italian factory has done is take the 1262cc Testastretta motor from the XDiavel and move it further back towards the back wheel. Up front they’ve pulled in the rake and trail to make the handling feel lighter and more responsive. They’ve also shortened the swingarm and shifted the oil-cooler to the front of the motor to clean things up aesthetically.

The factory has also cleaned up and made much more elegant the exhaust. It’s still double can, but it juts out of the belly of the bike in a racy, stubby sort of way, instead of effectively blocking out the view of the single-sided wheel. Exhaust aside, the bigger, geometric changes equate to a riding experience that, if you’ve had the pleasure of that original Diavel launched nine years ago, is instantly familiar, but still really quite different. Close your eyes and you know you’re on a Diavel. Look at the new 17-litre tank and flared shoulders complimented by the single, tiny colour screen and idiot lights perched on top of the handlebars, and you know you’re on a Diavel.

Fire the lump into life and you would bet your life that a Diavel was under your backside. So Ducati has at least got this right. Almost everything on the new bike is new. Aside from that engine, front mudguard, handlebars and rear mudguard holder, it’s a freshly created Diavel for 2019.

And yes, the new bike might be 5kg heavier than the old model at a (now) 288kg wet and the wheelbase is longer (20-odd mm), but even just paddling the bike around, let alone getting out on the move, the whole thing feels lighter and more nimble than you remember – the engineering theory works in practice. It’s brilliant. It’s racetrack thinking used to just make life easier on the road.

Find out more in the latest issue of MSL – on sale now!