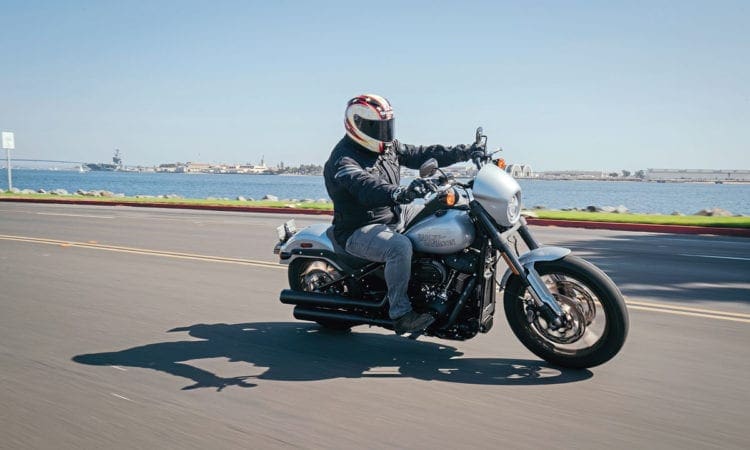 Is the new Low Rider S able to live up to the hype? In the brand new December issue of Motorcycle Sport & Leisure, Tony heads out to San Diego for a day of scraping pegs and cruisin’ it out, USA style, to find out.

The bike here with the latest dollop of ‘defiant attitude’ is the 2020 Low Rider S. A modern take on something of a H-D classic. Powered by the firm’s really rather good Milwaukee-Eight 114 and housed in the excellent softail chassis (I’m a fan), this is a big deal for Harley, which plans on selling lots of these things.

But is it the epitome of ‘defiant attitude’? Does it need to be? Probably not.

So let’s leave that silliness alone. It’s a meaty looking softail that comes in either black, or silver and black. It’s been styled with some elements harking back to the 1970s and 80s bikes – look at the lovely typeface used on the petrol tank. Look at all the bits like the cylinder heads and paint treatment on the 2-into-2 downtubes. Proper swish.

That new motor, the Milwaukee-Eight 114 is a lovely lump to use on the road. Making a whopping 119lb-ft of torque at 3000rpm, the air intake has been made better for power-improving breathing with an exposed air filter.

Then there’s the chassis.

The Softail frame is a clever mix of less material than on the old-style Harleys and all the stiffness that you could possibly need. And that engineering wrapped around the motor is mated finely to a Showa rear shock, which has pre-load adjustability and is now sited at a new angle between frame and swingarm.

The forks are good kit, too. Another Showa item, the 43mm units can handle everything that we encountered on the San Diego launch of the S. And whilst the handling initially feels slow to get from one side of the bike to the other, the reality is that at speed the whole bike feels settled and surefooted.