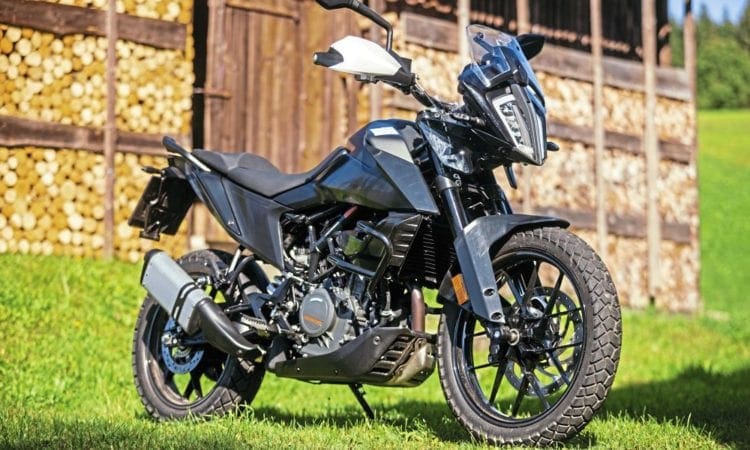 Has KTM just introduced the best-equipped small-capacity adventure bike to date? Alan Cathcart tested the prototype to find out…

Since production began back in 2011, no less than 515,000 KTMs have been built at its Bajaj partner’s factory in India.

According to company President/CEO Stefan Pierer, volume has gradually built until last year alone, over 100,000 such bikes left the Pune production lines.

None of those Indian-built KTMs, however, were directly descended from the kind of dual purpose on-/off-road bikes that have made the Austrian manufacturer so successful in the marketplace since introducing its first 620 Adventure multi-purpose single back in 1996.

That’s an absence widely attributed to Bajaj boss Rajiv Bajaj’s lack of conviction that any real demand existed for such machines in his company’s massive home market – the largest in the world for combustion-engined motorcycles.

One can only conject that the advent in the past two years of the 411cc Royal Enfield Himalayan and Indian-built BMW G310 GS may have helped change his mind – that, and Stefan Pierer’s talents for persuasion…

For that absence is all about to change, with the launch at this year’s EICMA Milan Show of the first small-capacity KTM go-anywhere bike, the 390 Adventure due to hit dealer showrooms in March next year. The bike is primarily developed in KTM’s R&D Centre at its Mattighofen HQ, but manufactured entirely in India.

While using the 390 Duke as a platform, its distinctive design is also derived from the company’s dominant KTM Rally bikes, which have won the iconic Dakar race for the past 18 years straight. Indeed, it can justly be claimed that with Rally events limited to 450cc bikes since 2011, the 390 Adventure is more closely related to KTM’s serial race-winning off-roaders than its larger capacity parallel-twin 790 Adventure and V-twin 1290 Super Adventure models are.

The chance to be the first outsider to ride the pre-production version of the new model some weeks before its EICMA launch, unveiled a bike which promises to be a genuine multi-purpose entry level motorcycle, rather than a lookalike styling exercise or a neo-retro nostalgia bike.

Read the FULL feature covering the KTM 390 Adventure prototype in the January edition of Motorcycle Sport & Leisure – on sale now.