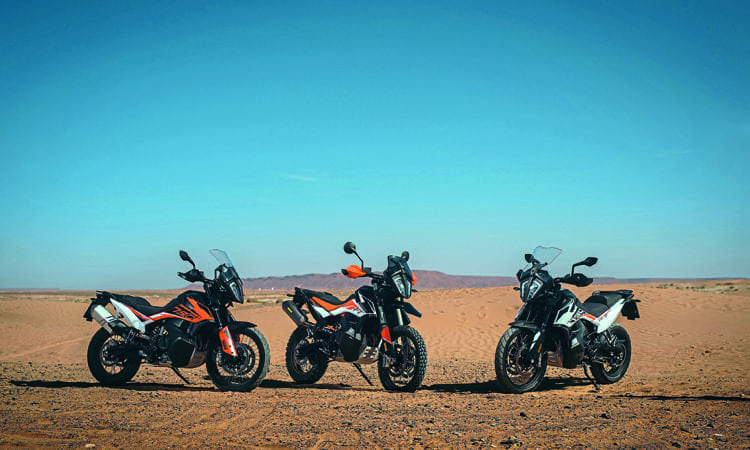 For an anxious moment, the top of the dune looked out of reach. As I climbed the gentle slope in the Moroccan desert, twisting the 790 Adventure R’s throttle slightly wider in an attempt to gain speed, the KTM barely accelerated; its rear tyre instead spinning harder and kicking out an even bigger plume of soft, dry sand.

I’d attacked the dune too slowly, and tweaked the throttle too sharply; and I almost paid the price by burying the rear wheel, just as I had ten minutes earlier. But this time the tyre found just enough grip. With the help of a quick dab of left boot, I crested the rise, reached firmer sand and kept going, impressed yet again by the 790 Adventure R’s ability to cope with the conditions.

This was my first ever experience of riding over – and occasionally into – sand dunes. Even adventure bike launches don’t normally include such extreme terrain. But this landscape was why KTM had come to Erfoud, in south-eastern Morocco near the border with Algeria, to launch the 790 Adventure and Adventure R. The Austrians aimed to show that their two new parallel twin middleweights are not like existing adventure bikes, and bring new possibilities to the class.

What the new parallel twins are like in many respects is their 790 Duke sibling, whose basic layout of 799cc, dohc eight-valve engine in a tubular steel frame is shared. Obvious differences include the Adventure models’ fairing, screen, aluminium bash-plate and bigger radiator; a fuel tank that extends down either side of the engine to hold 20 litres; and long-travel suspension holding wire-spoked wheels, the front a dirt-friendly 21 inches in diameter.

Both Adventure models use an engine that is softened slightly from Duke spec with new camshafts and injection system. This increases torque slightly below 7500rpm, and reduces it from there to the 10,000rpm limit. Maximum power output drops by 10bhp to 94bhp at 8000rpm, while the torque peak is slightly higher at 89Nm, and is produced 1400rpm earlier, at 6600rpm.

The Adventures’ shared chrome-molybdenum frame (orange in the case of the R) holds a cast aluminium swing arm, which operates the diagonally mounted rear shock without a linkage. The two models’ key difference is their WP suspension. The standard bike has non-adjustable WP forks and a preload-adjustable shock, both with 200mm of travel, while the Adventure R gets more sophisticated, multi-adjustable units at both ends, each giving an extra 40mm of travel.