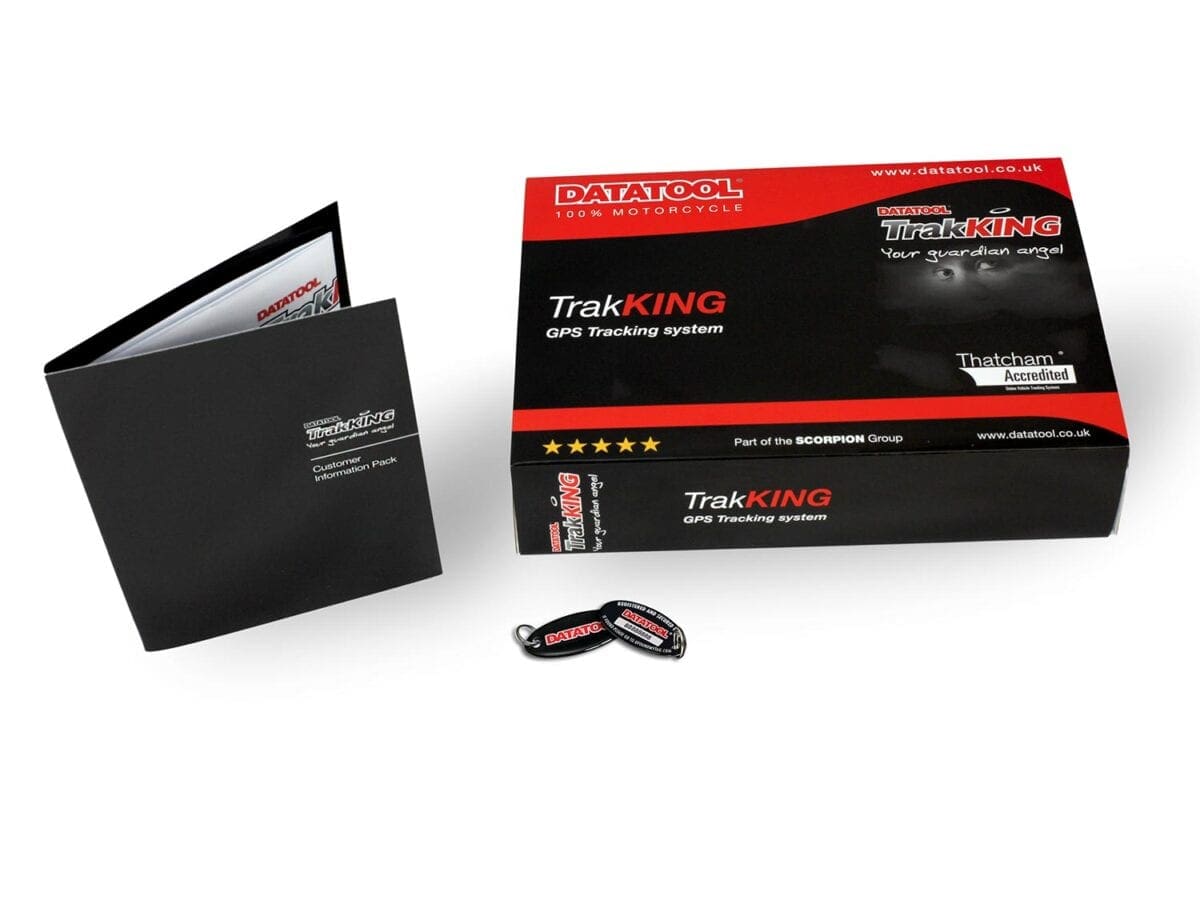 Would you want your motorcycle back if it was stolen? I’ve realised that the time, effort and money I put into a bike – particularly a custom project like the XSR700 – could be irreplaceable. And that’s not to mention the memories you’ve often built up with your machine.

Tracking devices can tell you exactly where your bike is at any moment. While there are increasingly cheap options available on eBay, only a premium product will offer the build quality and reliability so important in something like this. Datatool’s TrakKING is Thatcham approved, meaning it’s been sprayed with salt water and subjected to heat, vibration and impact, so it’ll stand up to anything a motorcycle can throw at it.

TraKING is also fully monitored by Datatool at its 24/7/365 centre. This costs £99 for a year’s subscription (27p per day), which is a fair price to pay for the high level of support and security. It takes just seconds for a gang of two or three to pick up a bike and throw it into the back of a van – around 26,000 motorcycles and scooters are stolen each year (more than 70 every day, half of those from within Greater London), and usually stripped for parts. In 2015, 130 machines equipped with TrakKING were taken… 116 of them were recovered.

If the worst happens

If TrakKING detects vibration or movement while the key is out of the ignition, it ‘wakes up’, checking its location to make sure it’s where it was when it went to sleep, and sends the owner a text to warn that movement is detected. In the event that the bike is travelling, or the unit can’t accurately determine where it is, it fully alerts the TrakKING team, who call you.

At this point, if the bike is confirmed as stolen you’re asked to call the police immediately and get a crime number. Pass this back to Datatool and they’ll liaise directly with the officers who can treat it as a theft in progress, with a good chance of catching the criminals in the act.

TrakKING is compact enough to be hidden away, but I can’t say any more than that – Datatool is rightly eager to ensure people don’t know what the unit looks like in order to make it more difficult for the bad guys to find.

I can tell you that it doesn’t record speed data, and only tracks the bike when it’s in full alert mode. It has a high-capacity back-up battery inside, and if it detects the supply has been removed it immediately contacts Datatool (it’ll also warn you if your bike’s battery is getting low). It has an exceptionally high-powered GPS antenna, and if it’s struggling to lock on to satellites, it can also use the mobile GSM network for location. In my test, it was accurate to around 15m…

While the company knew that I’d want to test the product, I didn’t tell them when or how I’d do it. Making it difficult for them, I had the bike parked facing out and fully unlocked in my garage. Even the steering lock would have slowed a thief down enough for the vibration warnings to initiate the alert process earlier.

With the van backed up to the garage, we pushed the bike up the ramp, caught it with the straps we had waiting and were gone. I’d had text alerts before we were strapped in, and within a couple of minutes I had the phone call. At this point I admitted that it was a test, but asked for the tracking to continue. We drove through the city centre, parking the van beneath a tower-block before I called Datatool, and asked where we were. They knew, exactly.

Thieves can’t see if a bike has a tracking device installed, so will usually leave it under a cover in a public place. If it’s not recovered, they’ll then take it away to strip. TrakKING’s recoveries include a GSX-R750 taken in Essex and found in a garage with 20 other stolen bikes; a Honda Vision recovered from the bottom of a river – the unit was still reporting the location – and one customer who had his 2007 ZX6R recovered five times in three years!

The biggest problem hampering a recovery is the owner not giving enough phone numbers – one CBR600RR was lost when the primary phone was turned off, and the second contact (the owner’s mum, who lived away) took the call but couldn’t raise her son. Datatool contacted the police directly, but by the time they’d raised the bike’s owner, the tracking unit has been removed.

Most bikes that are recovered generally suffer a broken steering lock and little else – they’re usually ridden home. The fastest recovery has been of an R1 from a London hospital in 14 minutes, though they’re generally found within 30 minutes to two hours.

TrakKING works in all of western and most of eastern Europe, so you’re covered when you’re riding away. When it’s asleep, it draws less than 1mA of power, with the very most being 250mA when the engine’s running, to charge the internal battery.

It’s easy to log onto the mobile-friendly website to turn off text message alerts, and to send a notification to let Datatool know if the bike is being worked on, either by yourself or at a dealer (I forgot at first, and got a call at 10pm one evening while tinkering).

You must remember to turn off alerts when you wash your bike – I got through four before I realised (you get five a month, and you can easily top them up if you’re very forgetful), but you shouldn’t need to tell Datatool what you’re doing, as you’ll likely be outside, in which case they’ll have an immediate and accurate GPS fix on the bike, so will be able to see it’s not moving.

Managing your device requires access to the internet, ideally through a smartphone, though if you rarely fiddle with your bike, you shouldn’t need to log on unless it’s to disable text alerts when washing or to notify the team that it’s going in for a service. If you have no data signal (for instance when boarding a ferry), you can phone the call centre at any time.

Turning on the ignition resets the device, so if you’re loading up with luggage you can just turn the key. Equally, when you’ve switched off at a petrol pump, text alerts don’t bother you immediately. A highly recommended security solution.

The AA told me that in some cases a tracker may be a requirement of the insurer, and that there could be a difference in future premiums based on whether a bike is recovered or not. My contact went on to tell me that any device that can track the location of your vehicle is better than none, but thieves tend to know where to look for units fitted by an amateur.

LV= Direct told me that their premium at renewal will be the same whether the bike is recovered and repaired or never seen again. They do not take into account the amount paid during the claim when determining any price changes to be applied at renewal. Again, tracking units may be required as a term of the policy for specialist bikes, but they currently don’t offer a discount if a tracker has been previously fitted.

TrakKING is intended to be professionally installed, but that needn’t mean it’s going to add a huge expense.

Pete Mouncer – The Bike Alarm Man – is an ex-RAF electrician installing two or three alarms and trackers every day! He considers a tracker a must if you’re not always near your bike to hear an alarm.