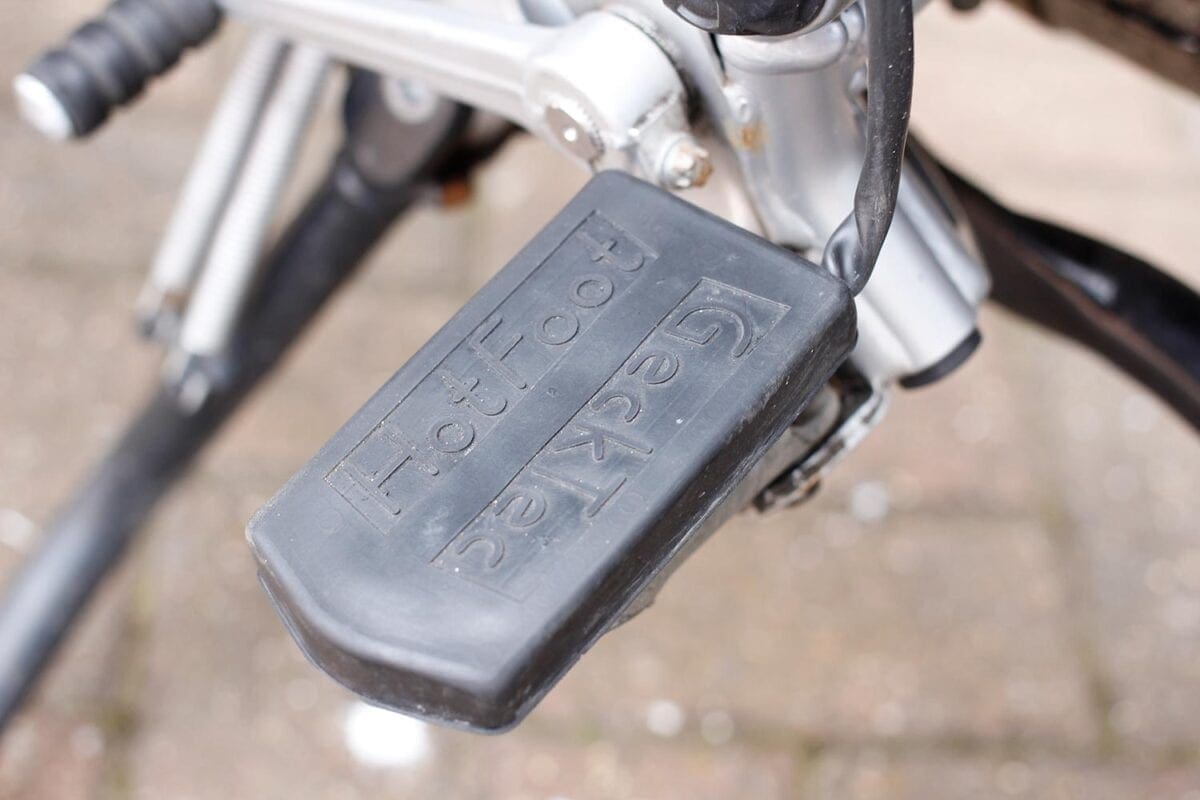 Three biking mates have come up with an ingenious solution to cold feet. You saw it here first…

How has nobody thought of this before? The Gecktec HotFoot system keeps your feet warm whilst riding, without the need for wires, chemicals, batteries or thick socks.

It’s the brainchild of three avid bikers: Tony Price – inventor and chemist; Harry Berry – an ex-TV technician, and his brother Albert – a self-employed builder. The idea came whilst sitting in the pub after a ride together. “Wouldn’t it be great to have heated grips for your feet” one of them asked… Tony had recently bought himself an induction cooker hob for home. He wondered if it would be possible to make a miniature induction heater, and scoured the internet, finding a company down the road from the guys in Cheshire that produces miniature induction coils for brazing… then the hard work really started. “What’s really driven it is our passion for motorcycling, “ says Tony. “But it’s been a lot of fun. There’s no better laboratory for testing than getting on a bike and going out for a ride.”

The HotFoot system is simple at heart – a flat, oval-shaped induction coil that uses electro-magnetic energy to heat a metal insole inserted in your boot. Where it gets complicated is in the fact that the coil tries to heat everything around it, not just the inside of your boot. Warming your footpegs or the side of the frame is inefficient, so with a low current draw a vital design requirement, the team worked on a reflective composite material in which to embed their custom-designed, low-resistance coil. This focuses the magnetic field upwards only – straight to your foot.

An induction coil only uses power when there’s metal near it, so the current-draw of the £295 HotFoot AW1 is tiny until you put your boot – with the metal insole inserted – onto the peg. On full power, the most Tony tells us the unit will draw is just 1.5A. This drops to 1A on the medium setting, and 0.7A at low. There’s also a ‘boost’ mode, which brings your boots up to temperature quicker, drawing 3A for just two minutes. And all the time the HotFoot plate – which fits simply to most pegs – stays completely cold.

The plates are wired to an aluminium box that’s tucked out of the way on your bike. This is wired to your battery, typically via a start-up relay, and has a bar-mounted control switch. The technology inside the box controls the output level, and converts the bike’s direct current to alternating current. A simpler £245 system is also available without the level control or boost, running at 1.5A while your feet are in place. Both units are also available with cooling fans for when the box has to be tucked away behind a fairing, or in the company’s other intended applications, such as jet-skis and snowmobiles.

The performance of the system depends on the thickness of your boot’s sole – around 10-16mm is the optimum, though Gecktec also sell suitable boots with the insoles already fitted. When I tried it out, my feet were comfortably warm in my Helds when running at full power, but when trying Tony’s thin-soled Frank Thomas boots I soon had to drop to medium.

This is already a great idea, and the potential in Tony, Harry and Albert’s technology is exciting to say the least. This is a British-built, paten-pending product, and the hope is to increase production further, offering employment to the youth of Cheshire. It seems inevitable that a motorcycle manufacturer will want to incorporate this technology in its own bikes at some point, but until then you can find out more or buy a HotFoot at www.gecktec.com, or by calling 07739 325742