Seen here in the ‘Guardian Red’ colour-scheme (£599.99), the E1 is a flip-front adventure-style lid with a composite shell, internal drop-down sun visor and removable peak. It comes with a five-year warranty and features a removable, washable Coolmax lining and Schuberth’s ‘Anti-Roll-Off’ system that prevents the lid rolling forwards in the event of a crash. A pin-lock anti-fog insert is supplied, and the adjustable top and chin vents are joined by another closable vent in the front that has a removable filter. 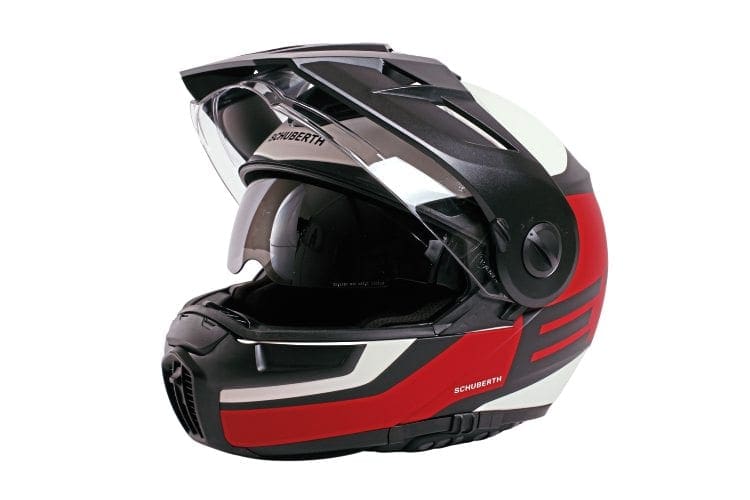 While the E1’s visors are different to those on the C3 Pro, the other helmets can be used here, without the blanking plates that are fitted when not using the removable peak. When I got the lid, these plates kept working themselves free, but it was only an issue with the very first batch – a replacement visor sent quickly by UK importer Tran Am solved the problem.

The peak can be adjusted between three heights, and while all bar the top position restrict how far the visor can be opened, it’s not an issue in use. The peak moves with the chin piece when raised, meaning that whatever position you set it at, it will always return. Neat, though the visor does close whenever you flip up.

I found that in the lower positions, I could see the end of the peak shaking while riding my KTM 1050 Adventure, which was a little distracting – in the top position it wasn’t visible, but still capable of blocking the sun when tipping my head. It causes very little drag when riding, though you are aware the peak’s fitted in heavy side-winds, as well as when turning your head for a life-saver. To be honest, during the summer I’ve tended not to use the peak, but am finding it more valuable in the low light of winter.

The ventilation is excellent, and it’s a snug, comfortable fit from the outset. I’ve heard people complain that Schuberths let water run onto the inside of the visor in rain – while an open chin vent can let the odd droplet flick up onto it, I’ve not noticed any running down from the top. It’s important to lock it properly by pulling down on the centre top of the visor. When closing it with one of the two thumb rests, the visor will stay cracked open on one side, creating good ventilation when riding in heavy traffic. Great if, like me, you suffer from steamed-up glasses. 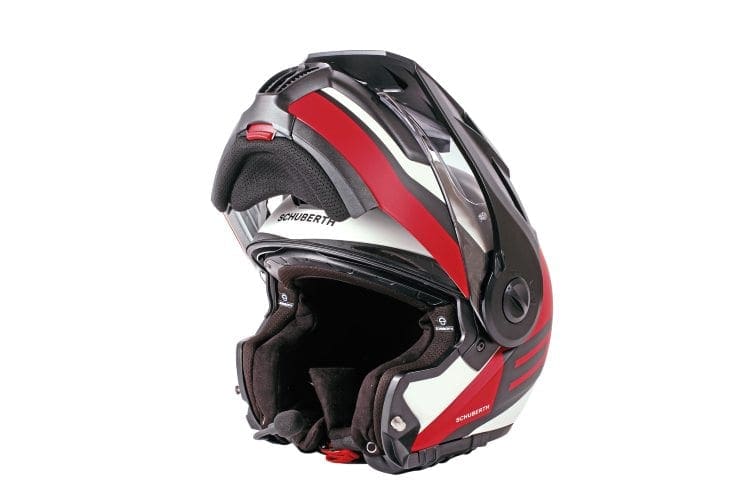 Like the C3 Pro, the E1 is well sealed around the neck, so works great with intercoms, giving your partner very clear audio. The E1 comes with a pair of integrated antenna to boost FM and Bluetooth signals, and having tested it with the optional £329.99 SRC integrated comms system, I can say that it’s the best radio reception I’ve used. It’s a good product, but unfortunately I found the neck skirt, in which the electronics and battery are fitted, to be very uncomfortable against my jaw-line. I also thought the controls were a little awkward, but if you’re interested in the SRC, try one at your dealer.

The E1 isn’t homologated as an open-face lid, so technically you shouldn’t ride with it open. I do, and the chin-piece stays locked in place perfectly well. When closed, it’s rated as a full-face.