This is the first helmet I’ve worn that wasn’t made by either Arai or Shoei, but after more than 5000 miles it’s become my go-to lid. There wasn’t much of a breaking in period, while for fit and comfort, on my head at least, it’s an easy five star item.

The Skwal comes with funky green LED lights on the chin and top vents, as well as the rear – this wasn’t something that interested me much, but with the summer evenings gone they’ve become far more than a novelty, making me much more visible when riding in the dark. 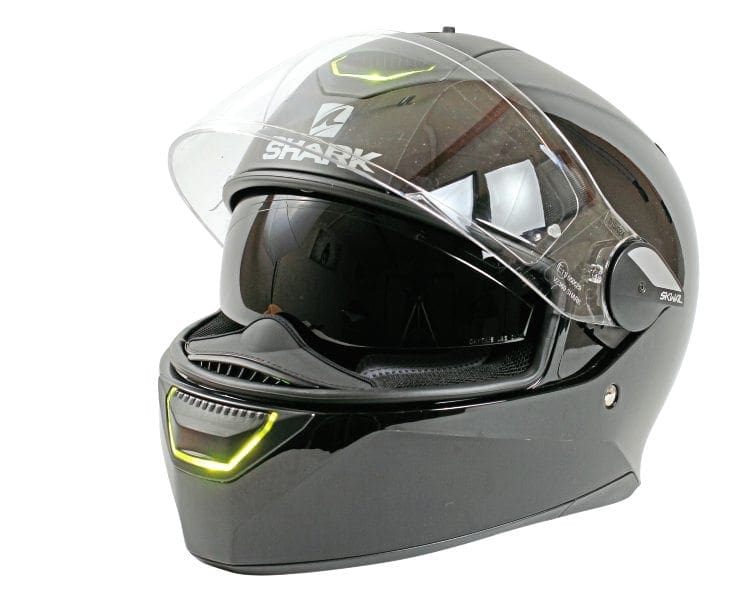 Charging the small internal lithium battery is akin to charging your mobile phone – there’s a short lead with a micro USB socket inside the lining. Some days I struggle to remember to charge my phone, so charging up my crash helmet isn’t a habit I’ve adopted fully just yet.

Unfortunately there’s no indication of the battery’s state of charge, but with the lights on steady it lasts between six and seven hours (Shark claims five). With the lights flashing, it should last double that. Sadly, the instructions state that you mustn’t charge for more than five hours. No leaving this plugged in overnight then. 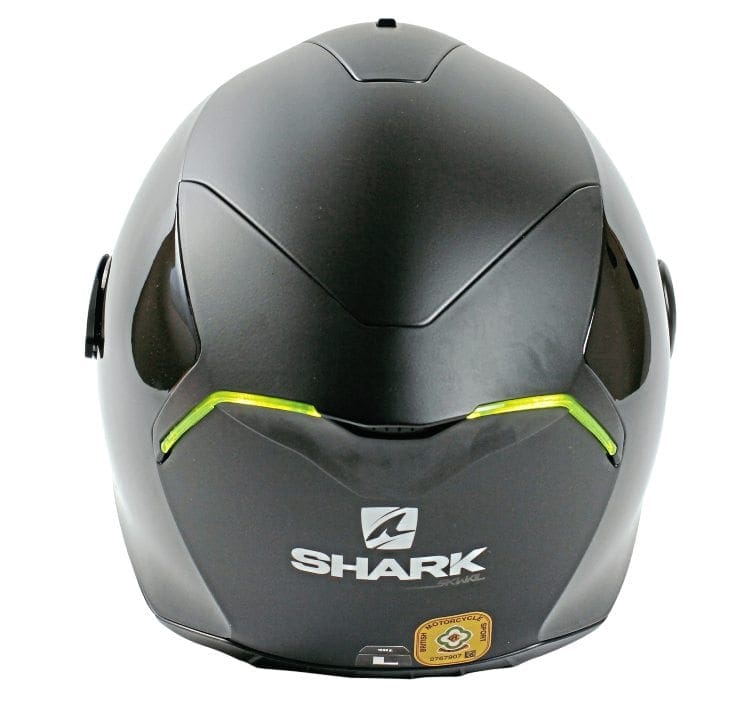 The switch for activating the lights, and cycling between steady or flashing, is situated in the base of the helmet, It can be a little fiddly to activate, but equally a little too easy to accidentally turn on when pulling the Skwal over my head. It took me a little time to perfect while avoiding the cable digging me in the back of the neck.

Riding in the summer, I appreciated the drop-down tinted visor that’s deployed by flipping the lever on the side. The Skwal comes with a Pinlock Maxvision insert that I didn’t bother with at first, but now it’s in, it’s transformed my winter riding.

The two-tone black finish looks smart, but it’s picked up plenty of marks and scratches during use. The front vent also vanished during one ride, leaving a gaping hole. Nevis didn’t hesitate to replace it though, thanks to the five-year warranty, and popping the new vent into place was quick and easy.

Inside, the lining and padding are still intact, and the comfort of the Skwal is on a par with the other premium crash helmets I’ve experienced. I don’t wear glasses, but the Shark does have ‘Easy Fit’ channels to make them slide in easily. The wind skirts at the front and rear help keep the noise down and drafts out, but my favourite feature is the quick-release strap – after decades of dealing with double-D buckles, it’s something I feel all crash helmets could benefit from.

Shark has just released the D-Skwal, which is the same lid but without the LEDs for £30 less. Personally though, I think the lights are a great innovation, and having seen other riders with them, I know how much more visible they can make you.