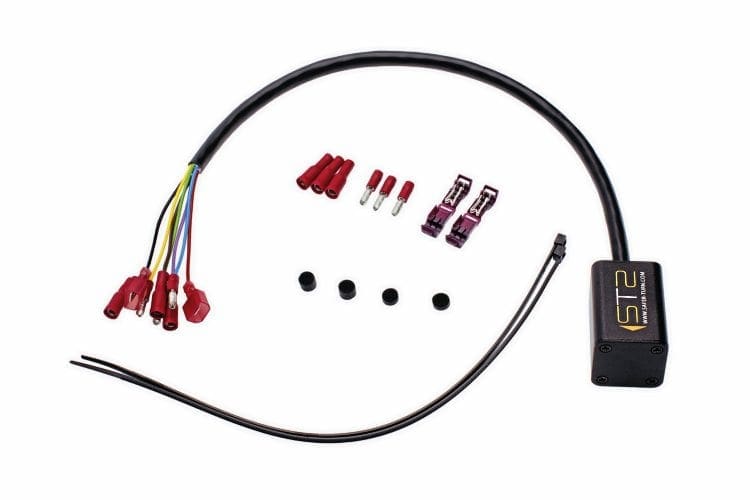 I was sceptical about the STS Smart Turn System when I first heard about it. Could an aftermarket self-cancelling system compatible with any bike really work?

Installing the system on my 2005 Yamaha FZS 1000 Fazer was a fairly straightforward procedure. The foam pieces go in the little cavities in the indicator switch to stop it latching (it just needs to make a quick connection for the indicator to activate and then return to neutral position). And that’s it!

On the road, my first impressions were very positive. The indicator switch felt a little strange as the foam pieces stopped it moving as much as it used to, but there was still enough feel to tell that the indicator had been selected.

The system continually monitors and processes information on whether the bike is turning or moving – or both. In fact, there are 300 data elements dealt with every second. Because the system relies on sensors rather than keeping the indicator on for a set amount of time, it works really well. In most situations the indicator is cancelled promptly after the turn. The only situation where it needs to be manually cancelled (which is easily done by re-pressing the indicator switch) is lane changes, where there’s not enough lean for the black box to detect it. Everywhere else it has worked flawlessly.

If you start indicating and have to stop to wait for the road to clear before turning, the indicator remains on until you have moved again and gone round the turn. It really is clever.

When I installed the system on my bike I wasn’t sure if I would keep it on after the initial test period, but now I’m loving it! The system works effectively, and the only problem I foresee is that I’ll get too used to it and will be lost when I’m on a bike with a traditional setup.