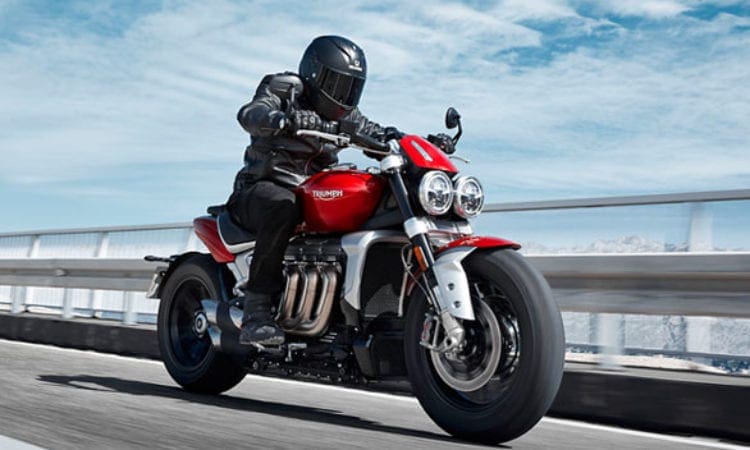 You knew this was coming when Triumph unveiled the limited edition 2019 Triumph Rocket 3 TFC  back in May. Now, Triumph have released the ultimate high performance muscle roadster.

Launched in 2004, Triumph’s Rocket III had the muscles, presence and torque that put fear in the hearts of its competitors. Now, the all-new Rocket 3 R and Rocket 3 GT bring back the big bad wolf of motorcycling.

With the world’s largest production motorcycle engine at 2500cc, the new Rocket 3s deliver more power (165bhp, up 11% on the previous generation) and the highest torque of any motorcycle with 163lb-ft (221Nm) @ 4000rpm.

Both new machines share the enormous engine, and the differences between the models are fairly subtle (nothing else about the bikes is!). The GT is more of a laid-back cruiser, whereas the R is just pure muscle and attitude. One of the differences is the saddle, which is a roadster set up on the R (773mm high) and more of a touring-oriented saddle with a pillion backrest on the GT (750mm high).

The handlebars are also more touring-styled on the GT. The foot pegs are different between the models too, and although both are adjustable, the GT has a more feet-forward approach.
With a weight saving of more than 40kg, the new Rocket 3 R and GT are both more than 13% lighter than the previous generation.

Combining imposing muscular stance and magnificent style, the highest levels of technology, Triumph’s class-leading handling, all of the Rocket’s world-renowned presence and all-day easy riding capability, the new Rockets are in a class of their own.