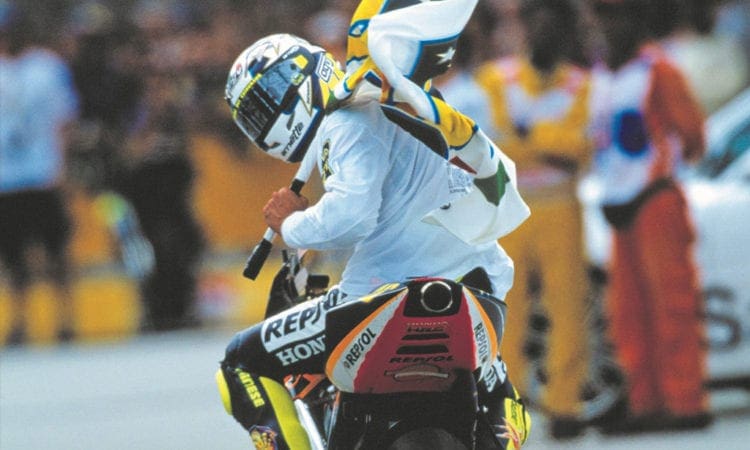 Eight World Titles. The crown in the 125cc, 250, 500cc, 990cc MotoGP and now 800cc MotoGP classes. Now he says he wants to take on the World Superbike best in a wild card appearance in the class. Is Valentino Rossi really the greatest rider who ever lived?

There are many people, race fans and armchair pundits who will claim that other riders were better. That Mike Hailwood, Giacomo Agostini or Luigi Taveri’s skills were more wide-ranging and worthy of such a lofty accolade. That a rider has to ride on the level-setting Isle of Man TT course alongside his efforts on a short circuit to really slot into the pantheon of the greats.

But is that really the case? Can Rossi, the youthful Italian who burst onto the world scene as a novice 125cc GP in 1996, really be given the title of Greatest of all Time without having spread his wings further afield than the short circuits?

Aside from the titles, there are many reasons why Valentino has been and continues to be, applauded as an icon.

Sure, he’s an incredible talent on two wheels and while now he’s known for being an iconic motorcyclist his career actually started on four-wheels.

Because of his mother’s concerns about his safety, little Valentino was sat in a go-kart to satiate his love of going fast and by the age of just five-years-old, the original kart was first replaced with a 60cc and then 100cc engines.

But here the talent was shining through. He won the regional kart title in 1990, switched to mini-moto exclusively in 1992 and 1993 where he won both national and European races.

He was onto the bigger motorcycles in 1993 also, finding his way onto a Cagiva Mita which he reportedly crashed first time out at the first corner … By the second year, Rossi had been provided with a factory Mita by Cagiva boss Claudio Lusuardi and that year he won the Italian title.

So even here, at this point in his fledging career, the young Rossi was finding himself in the centre of a certain amount of press attention. This son of the often-perceived-as-eccentric Graziano had clearly inherited his dad’s go-faster gene.

Eventually, the youth found his way onto an Aprilia, naturally, in 1996 and quickly found the gravel traps in his first tantalising year on the world stage but Valentino proved himself to be this incredibly quick learner that was so talked about in the Italian press by not only getting faster but taking the world crown in the tiddler class in 1997.

It’s here where we see the first underlining quality of the performance that argues the point for the Greatest title.

It’s in the second year in 125s where Valentino really proves his metal, winning races and putting together a season-long campaign that trounced the much more established hierarchy of the class. One of the marks of a real motorcycle racing icon is the ability to race in more than one class and so it was that the 1998 season saw Rossi jump up in capacity size to the 250cc class.

The schedule for success in the mid-sized championship was set by his improvements previously, many were expecting the first year to firstly be frenetic, littered with trips off-track, as brutal as necessary in the melee of racing, but ultimately it was still to be a learning year.

And it was just that. Twelve months later though and Rossi has quickly won the title, quite how the established stars of the quarter-litre class must have felt seeing Rossi get quicker, more settled and becoming a relentless points-scoring machine en route to that world title of 1999 is anyone’s guess.

But they needn’t have dwelt on the matter for too long. Valentino Rossi was already in the record books for becoming the youngest ever GP winner (at the time) in the 125 class, then the 125 and 250cc Champion – and the history books really matter to him, so much so that he wasn’t about to hang on in the 250s. There were bigger fish to fry.

It’s not for nothing that Rossi is a rider who knows how many races Mike Hailwood won, at what age John Surtees took his first GP win or how many actual world titles Phil Read took. To Valentino, these are the greats of the motorcycle world, and he wanted to be a part of that.

Outside of the actual touch of the likes of Anton Mang in the 250s, few in GP have ever reached the state of icon without stepping into the premier class, and Rossi knew this.

2000 may have marked a new millennium for a large chunk of the planet, but it also saw Rossi leave the 250s in favour of the big bikes. His time in the class was fortunate because for Rossi at least, he had time to get to grips with the 500cc two-stokes. The nastiest, most aggressive and snap-happy motorcycles ever created. He left Aprilia in favour of Honda to do it.

Many said that the jump could be too much for the rider who had displayed such an incredibly light touch with the smaller bikes. They were wrong, and while in 2000 he took to the Honda NSR well enough to win the Rookie of the Year title, it was in 2001 where his triple-crown was set as he won the top spot in the premier class.

Few would have bemoaned Rossi parking it up at that point, three World Championship Grand Prix titles is more than almost any other rider in the history of the sport could have achieved after all – but he wasn’t finished yet.

2002 and 2003 were another couple of titles in the premier class, newly named as MotoGP in 2002 when the screaming two-strokes were dropped in favour of the four-stroke 990cc change. As an added bonus, when Rossi won the last race of 2003 for Honda and the first race at Welkom in South Africa in 2004 on the Yamaha M1, he was the first rider to win two consecutive races in the class on two different makes of motorcycle.

In 2005 there was another title for the Italian, his first two seasons riding for Yamaha had delivered a brace of titles at the very pinnacle of sport. A good return on Yamaha’s investment.

No matter how you look at it, that’s surely enough for Rossi to be in the pantheon of motorcycling icons – but I think there are three more reasons for the Italian to be given the credit of the Greatest of all Time.

Firstly, it’s fair enough that other riders have dominated classes and so could be put up as being as worthy of the claim, but I don’t think that’s what this is all about.

Mick Doohan dominated the 500cc GP class en route to his five world titles, but nobody mentions him when talking about the Greatest of All Time. He only rode in the class for Honda too – Rossi has won world titles for Aprilia, Honda and Yamaha.

Giacomo Agostini was in a similar position where machinery advantage most definitely worked in his favour, but he didn’t go on to win as much across different manufacturers or types of motorcycle either, the four-stroke switch for Rossi proved his skills to be exemplary.

Secondly, Valentino’s ability to see the challenge and go for it has been incredible to witness and as if to add to that his recent comments about wanting to race in World Superbike, because it’s more elbow-to-elbow and frantic than the current MotoGP championship, speaks volumes about his desire to race.

Ultimately, I believe that the reason Valentino Rossi is not only a candidate for the Greatest of All Time but will almost certainly hold onto that title for a long time to come is because of last year’s MotoGP championship.

The switch to the 800s was tough enough to get to grips with but for 2008 Rossi changed rubber on the M1, taking on the Bridgestone tyres that Australian Casey Stoner used to such devastating effect in 2007 and it put the pair on level ground.

From that moment on the season came down to the two of them. Who was faster, who was stronger both physically and mentally and who would dig deepest when the season hit its all-too-familiar darkest moments?

When the chances came Rossi took them, winning his eighth title in the process and proving to the world that he was the best once again.

It is there where Rossi scores highest in this most impressive account, to come back after two years without the crown, to do so on the 800 and to do it on new rubber was a comprehensive master-stroke.

Valentino Rossi has long stood for the great and the good of motorcycle racing – and his last performance, combined with the tantalising prospect of the MotoGP and WSB wild card to come mean that in the search for Greatest of All Time, there can be no other contender for that particular title, no matter how the record books might stack up.

Discover even more Valentino Rossi images at Mortons Archive with over a century of motorcycle memories available to purchase.