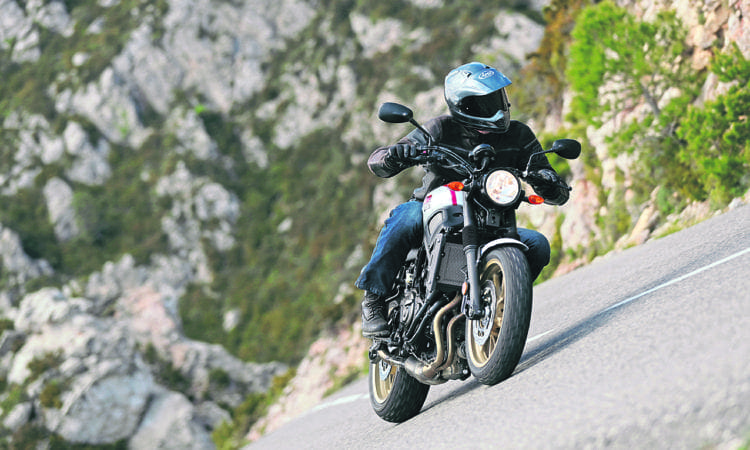 The new Yamaha XSR700 XTribute is a new fun bike with a small n and a big fat F.

A cynic might claim that the XTribute is so closely related to the XSR700 on which it’s based that Yamaha are pushing their luck by calling it a new model.

Others might suggest that the links between this latest twin-cylinder retro-bike and the old single-pot thumper whose name and style it echoes are distinctly tenuous.

Both observations have merit, but from where I’m sitting I couldn’t care less about that. Right now I’m perched aboard the XTribute’s dual-seat, nudging the wide, one-piece handlebar to send the Yamaha slicing accurately through another bend on a country road near Amposta on Spain’s north-eastern coast; then winding back the throttle to send the bike charging on to the next straight.

The engine is revving eagerly and emitting a glorious bark via the high-level Akrapovic pipe. So what, the XTribute seems to be replying. An accessorised MT-07 might perform much the same, and links to the elderly XT500 single referenced in the name might be sketchy, but when the result is this much fun and doesn’t cost the earth, who’s complaining?

That was presumably the hope of Yamaha’s product planners when they met to devise a fresh contender in the popular category of off-road themed retro-bikes, having seen the firm’s ageing SCR950 overshadowed by BMW’s R nineT Scrambler, Ducati’s Scramblers and Triumph’s, er, Scramblers. Imaginative product naming is not a feature of this category, but what those rival marques have in common is a charismatic, dirt-friendly star of the Sixties, Seventies or early Eighties on which to base a heritage model.

Yamaha made plenty of fine machines back when motocross bikes were called scramblers. Dual-purpose models including the DT-1 of 1968 and the DT250 and DT400 that followed in the mid-Seventies were quick, light and successful. Unfortunately, they were also two-strokes, making a modern recreation difficult. But the four-stroke XT500, launched in 1976, earned a loyal following with its single-cylinder simplicity, ruggedness and desert-racing potential, highlighted by its victories in the first two Paris-Dakar Rallies, in 1979 and 80.

A scrambler-style tribute to the XT star made plenty of sense, and Yamaha had just the model to use as the base, provided its extra pot could be overlooked. The XSR700 parallel twin has been in production for the last three years, setting no sales records, but holding its own as a retro-themed version of the hugely popular MT-07, despite slightly quirky styling that it shares with the XSR900 triple.

The XSRs have also proved fertile ground for Yamaha’s Yard Built programme. Custom builders from around the world – including Bunker of Turkey, Down and Out from Britain, Jigsaw of Greece, Maria Riding Company of Portugal, Roughcrafts of Taiwan and Velomacchi from the USA – have built XSR700-based specials with a scrambler or dirt-track theme.

A special built by Yamaha Australia, named XSR700 1976, provided the biggest inspiration. Taking styling cues from the XT500 that was launched in 76, it combined a tank in the original white, red and black stripe with an exhaust that ran below the engine before slanting up to a high-level silencer under the seat, just as the single’s did for that first year only.

Yamaha borrowed this theme and chose a slightly later XT500 as the basis of the XTribute: the 1981 model whose petrol tank has polished silver sides with a black top. The XTribute also mimics the XT with its red pinstriping, and its name in red and white letters on the side of the tank.

Other new parts are intended to increase the XT resemblance. The XTribute has a new dual-seat that is slightly flatter and 30mm taller than the standard XSR’s. Its footrests are serrated in off-road style. Wheels are cast rather than wire-spoked, but are coloured gold, like the old single’s, and wear Pirelli MT60RS tyres with blocky tread pattern.

Read the FULL feature in the September issue of Motorcycle Sport & Leisure, on sale August 2.